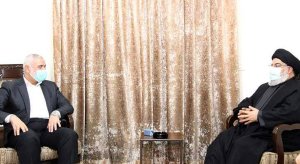 Voices // 2 years ago
Iran's Esmail Gaani is the new godfather of terror
The Iranian mullahs have become willing advocates of the Mafia playbook, replacing their fallen idol Qassem Soleimani, eliminated by an American drone strike, with his deputy, Esmail Ghaani.

World News // 4 years ago
3 killed in 5th straight Friday of clashes at Israel-Gaza border
Three Palestinians were killed and hundreds were injured Friday during the fifth weekly "March of Return" rally along the Israel-Gaza border, officials said.

World News // 4 years ago
12 dead as Israelis, Palestinians clash in Gaza protest
Israeli forces killed at least 12 Palestinians and injured more than 1,000 others as a protest grew Friday in the Gaza Strip, Palestinian health officials said.

World News // 4 years ago
Hamas: Won't stop protests when U.S. embassy opens in Jerusalem
Palestinian group Hamas said it won't be able to stop planned protests in May when the United States moves its embassy to Jerusalem.

World News // 4 years ago
Hamas leader dead after 'accidental' gunshot to head
Imad al-Alami, a co-founder of Hamas and senior official of the group, died Tuesday after he allegedly shot himself in the head earlier this month.

World News // 4 years ago
IDF sends forces to West Bank as clashes escalate over Jerusalem
Israel Defense Forces said they would send reinforcements to the West Bank as Hamas leaders called for an uprising over the United State's Jerusalem decision.

World News // 4 years ago
Hamas promises 'blood for blood' after Israeli tunnel bombing
A Hamas leader on Tuesday promised revenge for the deaths of seven Palestinians when Israel blew up an attack tunnel that stretched into its territory.

In day-to-day relations there may be differences, this is true, but it does not mean that there is a strategic tension with our brothers in Egypt

I have met with armed factions over the past two days and they stated their position clearly: they are committed to calm as long as (Israel) abides by it

In day-to-day relations there may be differences, this is true, but it does not mean that there is a strategic tension with our brothers in Egypt

This is a conspiracy designed to undermine Hamas and eliminate its presence in the West Bank. But it won't succeed

Ismail Haniyeh (Arabic: إسماعيل هنية‎, Ismaʻīl Haniyya; sometimes transliterated as Ismail Haniya, Ismail Haniyah) ( Arabic pronunciation (help·info)); (born January 29, 1963) is a senior political leader of Hamas and one of two disputed Prime Ministers of the Palestinian National Authority, the matter being under political and legal dispute. He became Prime Minister after the legislative elections of 2006 which Hamas won. President Mahmoud Abbas dismissed Haniyeh from office on 14 June 2007 at the height of the Fatah-Hamas conflict, but Haniyeh did not acknowledge the decree and continues to exercise prime ministerial authority in the Gaza Strip. The Palestinian Legislative Council also continues to recognise his authority.

Haniyeh was born in the Al-Shati refugee camp in the Gaza Strip. His parents became refugees after they fled their homes in Majdal (currently Ashkelon, Israel) during the 1948 Arab-Israeli War. In 1987, he graduated from the Islamic University of Gaza with a degree in Arabic literature. In 1989, he was imprisoned for three years by Israeli authorities for participation in the First Intifada and membership with Hamas. Following his release in 1992, he was exiled to Lebanon with Ahmed Yassin, Abdel-Aziz al-Rantissi and other senior Hamas politicians. A year later, he returned to Gaza and was appointed as Dean of the Islamic University.

After Ahmed Yassin, Hamas' spiritual leader, was released from prison in 1997, Haniyeh was appointed to head his office. He was targeted by the Israel Defense Forces for his alleged involvement in attacks against Israeli citizens. Following a suicide bombing in Jerusalem in 2003, he was slightly injured on his hand by an Israeli Air Force bomb attack attempting to eliminate the Hamas leadership. His position within Hamas continued to strengthen during the Second Intifada due to his relationship with Yassin, and because of the assassinations of much of the Hamas leadership by the Israeli security forces. In December 2005, Haniyeh was elected to head the Hamas list, which won the Legislative Council elections the following month.

FULL ARTICLE AT WIKIPEDIA.ORG
This article is licensed under the GNU Free Documentation License.
It uses material from the Wikipedia article "Ismail Haniyeh."