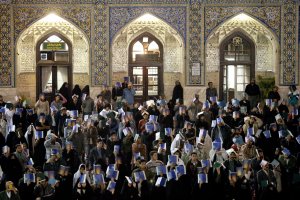 Voices // 8 months ago
Iran's death grip on Syria begins to loosen
The Iranian regime has begun to withdraw its forces from Syria. This was the news from James Jeffrey, former U.S. Ambassador to Iraq and current special presidential envoy for the Global Coalition to Counter Daesh.

World News // 5 years ago
20 reported killed in Saudi mosque bombing
At least 20 people were reported killed when a bomb detonated in an al-Qadeeh, Saudi Arabia mosque Friday.
World News // 6 years ago
Iraq insurgency is causing the country to run out of cemetery space
The sectarian violence in Iraq has resulted in too many dead bodies for a five-million grave cemetery to hold, causing families to resort to desperate measures.
World News // 6 years ago
Coordinated car bombings strike Baghdad districts at rush hour, killing 25 people
Twenty-five people were killed Tuesday and 80 others wounded in a coordinated attack using eight bomb-laden cars at rush hour in Baghdad.
World News // 7 years ago
Turkey reaches out to Hezbollah for talks on kidnapped pilots
Turkish officials say they have reached out to Hezbollah in Lebanon in efforts to secure the release of two pilots kidnapped in Beirut.
Special Reports // 7 years ago
Lebanon, Turkey navigate kidnapping row
The Lebanese government said Wednesday it shared Ankara's concerns about any negative consequences from the abduction in Turkish pilots in Lebanon.

Shiites make up about 70 percent of the Iraqi population, and 80 percent my country's Arabs belong to this branch of Islam

Although we are in the majority, we are being persecuted

Alī ibn Abī Ṭālib (Arabic: علي بن أﺑﻲ طالب; Transliteration: ʿAlī ibn Abī Ṭālib, 13th Rajab, 24 BH–21st Ramaḍān, 40 AH; approximately October 23, 598 or 600 or March 17, 599 or 600–January 27, 661) was the cousin and son-in-law of the Islamic prophet Muhammad, who ruled over the Islamic Caliphate from 656 to 661. Sunni Muslims consider Ali the fourth and final of the Rashidun (rightly guided Caliphs), while Shi'a Muslims regard Ali as the first Imam and consider him and his descendants the rightful successors to Muhammad, all of which are members of the Ahl al-Bayt, the household of Muhammad. This disagreement split the Muslim community into the Sunni and Shi'a branches.

Most records indicate that during Muhammad's time, Ali was the only person born in the Kaaba sanctuary in Mecca, the holiest place in Islam. His father was Abu Talib ibn Abd al-Muttalib and his mother was Fatima bint Asad but he was raised in the household of Muhammad, who himself was raised by Abu Talib, Muhammad's uncle. When Muhammad reported receiving a divine revelation, Ali was among the first to accept his message, dedicating his life to the cause of Islam.

FULL ARTICLE AT WIKIPEDIA.ORG
This article is licensed under the GNU Free Documentation License.
It uses material from the Wikipedia article "Imam Ali."
Back to Article
/