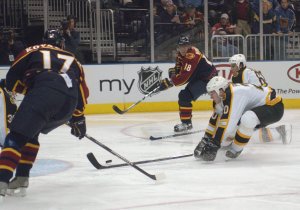 NHL // 1 year ago
New-look Canadiens host Kings
The new-look Montreal Canadiens, an early season surprise in the NHL, will make their home debut Thursday when they host the Los Angeles Kings (1-1-1) at Bell Centre.

Ilya Valeryevich Kovalchuk (Russian: Илья́ Вале́рьевич Ковальчу́к; born April 15, 1983) is a Russian professional ice hockey left winger who is an alternate captain of the New Jersey Devils of the National Hockey League. Drafted first overall in the 2001 NHL Entry Draft by the Atlanta Thrashers, he began his NHL career in 2001–02 with Atlanta and was nominated for the Calder Memorial Trophy as league rookie-of-the-year. He is a three-time NHL All-Star and won the Rocket Richard Trophy as the league's leading goal-scorer in 2004 in a three-way tie with Jarome Iginla and Rick Nash. After eight seasons with the Thrashers, he was traded to the Devils in February 2010. As a free agent he signed a 17 year, $102 million contract with the Devils in 2010, but the contract was ruled invalid by the NHL; new terms of 15 years and $100 million were later signed.

Kovalchuk played for Russian Super League club HC Spartak Moscow for two seasons before entering the NHL. Drafted by the Thrashers first overall in the 2001 NHL Entry Draft, he became the first Russian to be drafted first overall in the NHL's history. In club-level competition, Kovalchuk wore the number 17 as a tribute to Valeri Kharlamov, a Soviet superstar in the 1970s.

FULL ARTICLE AT WIKIPEDIA.ORG
This article is licensed under the GNU Free Documentation License.
It uses material from the Wikipedia article "Ilya Kovalchuk."
Back to Article
/