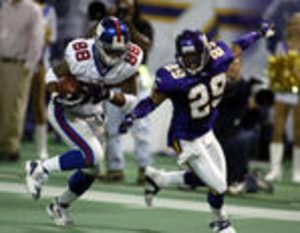 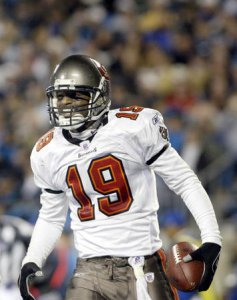 NFL // 1 year ago
Adrian Peterson leads Redskins by Giants
Adrian Peterson's two touchdowns were just enough to give the Washington Redskins a 20-13 win over the hapless New York Giants at MetLife Stadium on Sunday.

Everybody was behind me. They said, 'You have to step up and make a play,

Isaac Jason "Ike" Hilliard (born April 5, 1976 in Patterson, Louisiana) is an American football wide receiver who is currently a free agent. He was drafted by the New York Giants seventh overall in the 1997 NFL Draft. He played college football at Florida.

Hilliard has also played for the Tampa Bay Buccaneers.

Hilliard played his college football for the Florida Gators. In his junior year in 1996 he made the College Football All-America Team as Florida won their first National Championship under Steve Spurrier. The Gators finished the season with a record of 12-1 after a victory in the Sugar Bowl over the Florida State Seminoles. He finished his career at Florida with 126 receptions for 2,214 yards and 26 touchdowns.

FULL ARTICLE AT WIKIPEDIA.ORG
This article is licensed under the GNU Free Documentation License.
It uses material from the Wikipedia article "Ike Hilliard."
Back to Article
/