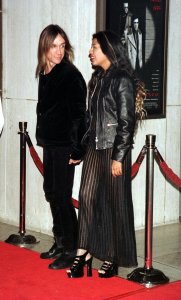 Iggy Pop (born James Newell Osterberg, Jr. on April 21, 1947) is an American singer, songwriter, musician, and occasional actor. Although he has had only limited mainstream commercial success, Iggy Pop is considered an influential innovator of punk rock, hard rock, and other related styles. He is sometimes referred to by the nickname "the Iguana", and is widely acknowledged as one of the most dynamic stage performers of all time. Pop began calling himself Iggy after his first band in high school, The Iguanas.

Iggy Pop was the lead singer of The Stooges, a late 1960s/early 1970s rock band who were influential in the development of the nascent hard rock and punk rock genres. The Stooges became infamous for their live performances, during which it was not uncommon for Pop (who traditionally performs bare-chested) to self-mutilate, verbally abuse the audience, expose himself and leap off the stage (the first or among the first to stage dive). The Stooges were unsuccessfully nominated seven times to The Rock and Roll Hall of Fame before it was announced they will be inducted as part of the class of 2010.

Pop's popularity has ebbed and flowed throughout the course of his subsequent solo career. His best-known solo songs include "Lust for Life," "I'm Bored," "Real Wild Child," the Top 40 hit "Candy" (with vocalist Kate Pierson of The B-52's) and "The Passenger". A biopic of Pop's life and career titled The Passenger is in development.

FULL ARTICLE AT WIKIPEDIA.ORG
This article is licensed under the GNU Free Documentation License.
It uses material from the Wikipedia article "Iggy Pop."
Back to Article
/