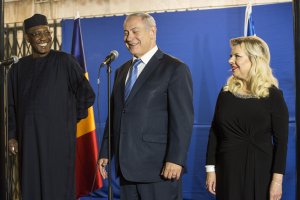 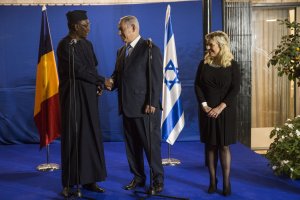 U.S. News // 4 years ago
Barack Obama calls for global integration during last U.N. address
Barack Obama called for the international community to integrate globally in terms of migration and economics during his last address to the U.N. as president.

General Idriss Déby Itno (إدريس ديبي) (born 1952) is the President of Chad and the head of the Patriotic Salvation Movement. Déby is of the Bidayat clan of the Zaghawa ethnic group. He added "Itno" to his surname in January 2006.

Déby was born in Fada as the son of a herder. After finishing school he entered the Officers' School in N'Djamena. From there he was sent to France for training, returning to Chad in 1976 with a professional pilot certificate. He remained loyal to the army and to President Félix Malloum until central authority crumbled in 1979. Déby tied his fortunes to those of Hissène Habré, one of the chief Chadian warlords. A year after Habré became President in 1982, in exchange for his loyalty, Déby was made commander-in-chief of the army. He distinguished himself in 1984 by destroying pro-Libyan forces in Eastern Chad. In 1985 Habré removed him from his post and sent him to Paris to follow a course at the École de Guerre; on his return he was made chief military advisor to the Presidency. In 1987 he confronted Libyan forces on the field, adopting tactics that inflicted heavy losses to enemy forces. A rift emerged in 1989 between Habré and Déby over the increasing power of the Presidential Guard. Habré accused Déby of preparing a coup d'état, motivating Déby to flee to Libya. He moved to Sudan and formed the Patriotic Salvation Movement, an insurgent group, supported by Libya and Sudan, which started operations against Habré in October 1989. He unleashed a decisive attack on 10 November 1990, and on 2 December Déby's troops marched unopposed into the capital, N'Djaména.

After three months of provisional government, on 28 February 1991, a charter was approved for Chad with Déby as president. A new constitution was approved by referendum in March 1996, followed by a presidential election in June. Déby received first place in the first round but fell short of a majority; he was then elected president in the second round, held in July, with 69% of the vote. He was re-elected in the May 2001 presidential election, winning in the first round with 63.17% of the vote, according to official results, although international observers noted irregularities in the election process. In June 2005, a successful referendum was held to eliminate a two-term constitutional limit, which enabled Déby to run again in 2006. He was a candidate in the 2006 presidential election, held May 3, which was greeted with an opposition boycott. According to official results Déby won the election with 64.67% of the vote; this was revised downward from the initially announced result of 77.6%. Idriss Deby is currently ranked 17th on Parade Magazine’s 2009 World’s Worst Dictator list.

FULL ARTICLE AT WIKIPEDIA.ORG
This article is licensed under the GNU Free Documentation License.
It uses material from the Wikipedia article "Idriss Deby."
Back to Article
/