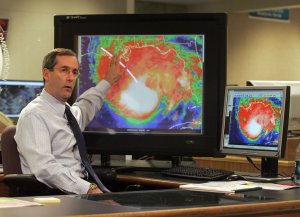 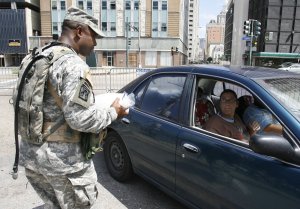 Hurricane Gustav (pronounced /ˈgʊstɑːv/) was the second most destructive hurricane of the 2008 Atlantic hurricane season. The storm was the seventh tropical cyclone, third hurricane, and second major hurricane of the season. Gustav caused serious damage and casualties in Haiti, the Dominican Republic, Jamaica, the Cayman Islands, Cuba and the United States. Gustav caused at least $8.5 billion (2008 USD) in damages. Gustav triggered the largest evacuation in United States history. More than 3 million people fled the oncoming hurricane.

It formed on the morning of August 25, 2008, about 260 miles (420 km) southeast of Port-au-Prince, Haiti, and rapidly strengthened into a tropical storm that afternoon and into a hurricane early on August 26. Later that day it made landfall near the Haitian town of Jacmel. It inundated Jamaica and ravaged Western Cuba and then steadily moved across the Gulf of Mexico.

Once into the Gulf, Gustav gradually weakened because of increased wind shear and dry air. It weakened to a Category 2 hurricane late on August 31, and remained at that intensity until landfall on the morning of September 1 near Cocodrie, Louisiana. Weakening continued, and Gustav weakened to a tropical storm that evening and to a tropical depression the next day as it meandered around the south-central US. The weak system became extratropical on September 4 and was absorbed by another low on September 5.

FULL ARTICLE AT WIKIPEDIA.ORG
This article is licensed under the GNU Free Documentation License.
It uses material from the Wikipedia article "Hurricane Gustav."
Back to Article
/