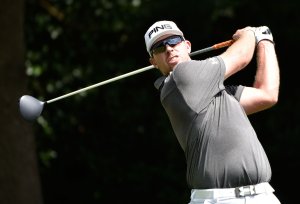 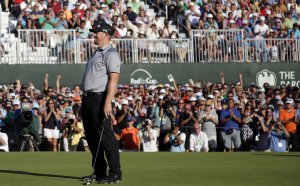 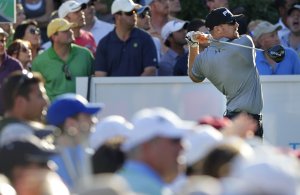 Golf // 4 years ago
2017 AT&T Byron Nelson Round 2 Leaderboard: Dustin Johnson among early second-round leaders
World No. 1 Dustin Johnson, fellow American Cameron Tringale and Byeong Hun An share the lead at 6-under-par 134 after the early wave of the second round.

Golf // 4 years ago
2017 AT&T Byron Nelson Round 1 Leaderboard Update: Hahn, Barnes share first-round lead
A group of the best golfers in the world tried to tame the blustery conditions as well as the challenging course at the TPC Las Colinas in the first round.

Golf // 5 years ago
Final Byron Nelson event at current course tees off this week
The AT&T Byron Nelson is playing out the string at TPC Four Seasons Resort at Las Colinas in Irving, Texas, this week and will head for the greener pastures of Trinity Forest Golf Club in Dallas next year.

I guess with that storm it brought some tranquility to the golf course, because there was just no wind

Hunter Myles Mahan (born May 17, 1982) is an American professional golfer who plays on the PGA Tour.

Mahan was born in Orange, California. He had a successful amateur career, winning the 1999 5A Texas State High School Golf Championship while attending McKinney High School and the 1999 U.S. Junior Amateur. After high school, Mahan enrolled at the University of Southern California, where he was named Pacific-10 Conference Freshman of the Year. Mahan only played one year at USC before he transferred to Oklahoma State University, where he was a two-time Big 12 Conference Player of the Year and a two-time first-team All American. Mahan was the runner-up at the U.S. Amateur in 2002, in which he was defeated by Ricky Barnes 2 & 1. He won the Haskins Award in 2003 for outstanding collegiate golfer.

Mahan turned professional in 2003 and made it through qualifying school to earn a PGA Tour card for the 2004 season. His first PGA Tour victory, which came at the 2007 Travelers Championship, lifted Mahan into the top 100 of the Official World Golf Rankings. In August 2007 Mahan entered the top 50 and by March 2008 he had reached the top 30. His performances in 2007 saw U.S. Presidents Cup captain Jack Nicklaus choose Mahan as one of two captain's picks for the U.S. team.

FULL ARTICLE AT WIKIPEDIA.ORG
This article is licensed under the GNU Free Documentation License.
It uses material from the Wikipedia article "Hunter Mahan."