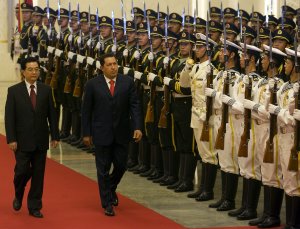 Top News // 10 months ago
On This Day: U.S. forces evacuate Americans from Phnom Penh
On April 12, 1975, the U.S. military evacuated Americans from the U.S. Embassy in Phnom Penh, Cambodia, as part of Operation Eagle Pull.

Top News // 10 months ago
The Almanac
On April 12, 1975, the U.S. military evacuated Americans from the U.S. Embassy in Phnom Penh, Cambodia, as part of Operation Eagle Pull.

World News // 10 months ago
Spain denies Mexico apology over 1521 Spanish conquest
The Spanish government has "rejected with all firmness" a request for an apology from Mexican President Andres Manuel Lopez Obrador for an invasion 500 years ago.

World News // 1 year ago
Mexico, Uruguay, EU officials meet over Venezuela crisis
Officials of more than a dozen countries, including Mexico, Uruguay, Bolivia and the European Union met Thursday in Montevideo to seek dialogue in Venezuela.

World News // 1 year ago
Venezuela releases foreign journalists after pressure from governments
Venezuela freed five journalists Thursday after a crackdown this week that saw nine detentions and officials in Chile, France and Spain demanding their release.

World News // 1 year ago
Venezuelan opposition readies protests against Maduro
Venezuela's National Assembly leader has called for broad sectors of the country to protest next week against President Nicolas Maduro.

We are at 3 million and a little more barrels daily, and we have been increasing production from the Orinoco Belt

We've said that we have 300 billion barrels but the administration of President (Barack) Obama published a report saying that 500 billion barrels could be recovered there. That's probably because they have more technology than we do

I neglected my health and I was reluctant to have medical check-ups. It was a fundamental mistake for a revolutionary

Hugo Rafael Chávez Frías (Spanish pronunciation: ; born July 28, 1954) is the 56th and current President of Venezuela, having held that position since 1999. He was formerly the leader of the Fifth Republic Movement political party from its foundation in 1997 until 2007, when he became the leader of the United Socialist Party of Venezuela (PSUV). Following his own political ideology of Bolivarianism and "Socialism for the 21st Century", he has focused on implementing socialist reforms in the country as a part of a social project known as the Bolivarian Revolution, which has seen the implementation of a new constitution, participatory democracy and the nationalisation of several key industries.

Born into a working class family in Sabaneta, Barinas, Chávez became a career military officer, and after becoming dissatisfied with the Venezuelan puntofijismo political system which he viewed as corrupt and undemocratic, he founded the secretive Revolutionary Bolivarian Movement-200 (MBR-200) in the early 1980s to work towards overthrowing it. After the Democratic Action government of President Carlos Andrés Pérez ordered the violent repression of protests against spending cuts, Chávez led the MBR-200 in an unsuccessful coup d'état against the government in 1992, for which he was imprisoned.

Getting out of prison after two years, he founded a social democratic political party, the Fifth Republic Movement, and was elected president of Venezuela in 1998. He subsequently introduced a new constitution which increased rights for marginalised groups and altered the structure of Venezuelan government, and was re-elected in 2000. During his second presidential term, he introduced a system of Bolivarian Missions, Communal Councils and worker-managed cooperatives, as well as a program of land reform, whilst also nationalising various key industries. The opposition movement meanwhile, arguing that he was a populist who was eroding representative democracy and becoming increasingly authoritative, attempted to remove him from power both through an unsuccessful military coup in 2002 and a recall referendum in 2004. In 2005, he openly proclaimed his adherence to socialism, and was again elected into power in 2006, following which he founded his new political party, the PSUV, in 2007. Although suffering from cancer in 2011, Chávez has stated his intention to stand for re-election in 2012.

FULL ARTICLE AT WIKIPEDIA.ORG
This article is licensed under the GNU Free Documentation License.
It uses material from the Wikipedia article "Hugo Chavez."
Back to Article
/