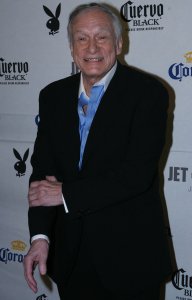 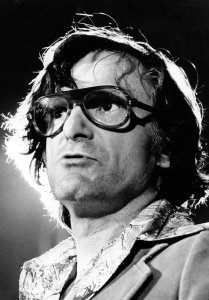 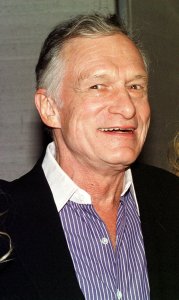 Hefner was born in Chicago, Illinois, the elder of two sons born to Grace Caroline (née Swanson; 1895–1997) and Glenn Lucius Hefner (1896–1976), both teachers. Hefner's mother was of Swedish descent and his father had German and English ancestry. On his father's side, Hefner is a direct descendant of Plymouth governor William Bradford. He has described his family as "conservative, Midwest, Methodist." He went to Sayre Elementary School and Steinmetz High School, then served as a writer for a military newspaper in the U.S. Army from 1944 to 1946. He later graduated from the University of Illinois at Urbana Champaign with a B.A. in psychology with a double minor in creative writing and art in 1949, earning his degree in two and a half years. After graduation, he took a semester of graduate courses in sociology at Northwestern University but dropped out soon after.

Working as a copywriter for Esquire, he left in January 1952, after being denied a $5 raise. In 1953, he mortgaged his furniture, generating a bank loan of $600 (or $800—he cannot recall which) and raised $8,000 from 45 investors— including $1,000 from his mother ("Not because she believed in the venture," he told E! in 2006. "But because she believed in her son") – to launch Playboy, which was initially going to be called Stag Party. The undated first issue, published in December 1953, featured Marilyn Monroe from her 1949 nude calendar shoot and sold over 50,000 copies. Hefner, who never met Monroe, bought the crypt next to hers at the Westwood Village Memorial Park Cemetery. After it was rejected by Esquire magazine in 1955, Hefner agreed to publish in Playboy Charles Beaumont's science fiction short story, "The Crooked Man," about straight men being persecuted in a world where homosexuality was the norm. After receiving angry letters to the magazine, Hefner wrote a response to criticism where he said, "If it was wrong to persecute heterosexuals in a homosexual society then the reverse was wrong, too." Hefner is portrayed as a gay rights pioneer in the documentary film, Hugh Hefner: Playboy, Activist and Rebel.

FULL ARTICLE AT WIKIPEDIA.ORG
This article is licensed under the GNU Free Documentation License.
It uses material from the Wikipedia article "Hugh Hefner."
Back to Article
/