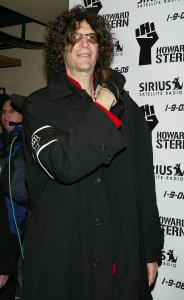 Entertainment News // 1 month ago
Howard Stern extends deal with Sirius for five more years
"The Howard Stern Show" is to continue exclusively on SiriusXM for the next five years, its host and the satellite radio company announced Tuesday.

Entertainment News // 2 months ago
Eddie Vedder remembers Chris Cornell: 'Still haven't quite dealt with it'
Eddie Vedder of Pearl Jam discussed the late Chris Cornell and how the death of the Soundgarden frontman affected him while appearing on "The Howard Stern Show."

Entertainment News // 3 months ago
Andy Richter: COVID-19 makes for 'interesting' times on 'Conan'
Comedian Andy Richter is keeping busy amid the COVID-19 pandemic, but efforts to slow the spread of the virus have brought some big changes to his podcast and his work on late-night series "Conan."

Entertainment News // 1 year ago
Judge throws out slander claim in lawsuit against Alec Baldwin over parking-spot spat
A Manhattan judge awarded Alec Baldwin a partial victory in a lawsuit connected to a 2018 dispute over a parking space that resulted in the actor being arrested.

Fans of Howard Stern and Howard TV can now celebrate that their favorite TV destination will continue for another two years. Plus, they will love the new original concepts

Paul asked who she was after seeing her give a speech

If I quit my radio show and became a florist, flowers would be under investigation right now

Don't break up the family. It will be a great ride in the future

Howard Allan Stern (born January 12, 1954) is an American radio personality, television host, author and actor best known for his radio show, which was nationally syndicated from 1986 to 2005. He gained wide recognition in the 1990s where he was labeled a "shock jock" for his outspoken and sometimes controversial style. Stern has been exclusive to Sirius XM Radio, a subscription-based satellite radio service, since 2006.

The son of a former recording and radio engineer, Stern wished to pursue a career in radio at the age of five. While at Boston University he worked at the campus station WTBU before a brief stint at WNTN in Newton, Massachusetts. He developed his on-air personality when he landed positions at WRNW in Briarcliff Manor, WCCC in Hartford and WWWW in Detroit. In 1981, he was paired with his current newscaster and co-host Robin Quivers at WWDC in Washington, D.C. Stern then moved to WNBC in New York City in 1982 to host afternoons until his firing in 1985. He re-emerged on WXRK that year, and became one of the most popular radio personalities during his 20-year tenure at the station. Stern's show is the most-fined radio program, after the Federal Communications Commission (FCC) issued fines to station licensees for allegedly indecent material that totaled $2.5 million. Stern has won Billboard's Nationally Syndicated Air Personality of the Year award eight times, and is one of the highest-paid figures in radio.

Stern describes himself as the "King of All Media" for his ventures outside radio. Since 1987, he has hosted numerous late night television shows, pay-per-view events and home video releases. He embarked on a five-month political campaign for Governor of New York in 1994. His two books, Private Parts (1993) and Miss America (1995), spent 20 and 16 weeks respectively on The New York Times Best Seller list. The former was adapted into Private Parts (1997), a biographical comedy film that starred Stern and his radio show staff that earned $41.2 million in domestic revenue. Stern performs on its soundtrack which topped the Billboard 200 chart.

FULL ARTICLE AT WIKIPEDIA.ORG
This article is licensed under the GNU Free Documentation License.
It uses material from the Wikipedia article "Howard Stern."
Back to Article
/