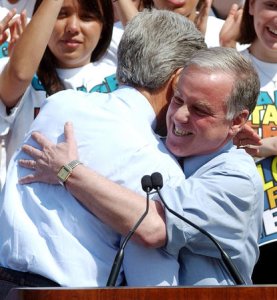 Voices // 3 years ago
Anger without a cause essential to Donald Trump's political success
The emotional politics of U.S. President Donald Trump have never been more intriguing.

U.S. News // 3 years ago
Tom Perez elected new DNC Chair in second round of voting
Tom Perez was elected as new chairman of the Democratic National Committee on Saturday in a contentious race.

U.S. News // 5 years ago
Ex-Clinton backer O'Malley ready to battle Hillary for 2016 White House bid
A week from now, there may be several more candidates on the official list of 2016 presidential hopefuls -- including a man who backed Hillary Clinton in 2008.
U.S. News // 6 years ago
N.Y. Gov. Andrew Cuomo's primary challenger stays on ballot
New York Gov. Andrew Cuomo's campaign says it will not appeal a ruling allows law professor Zephyr Teachout to remain in the Democratic primary.
Odd News // 7 years ago
The almanac
UPI Almanac for Friday, Jan. 3, 2014.
Outside View // 7 years ago
Outside View: Action needed to save Iranian dissidents in Iraq
Imagine if seven British citizens had been taken hostage in a foreign land and couldn't be located, that's exactly what has happened to seven members of an Iranian opposition group but there has been little news coverage of this affair.

If he had been asked to go to that event, he would have been there

As Howard was making the decision to run for chair after the election, it was a great group of supporters ... and it gave us a great vehicle and platform to run the chair's race

We have got to come together and unite our party

You come in the room and he's pretty set on who should be the best guy at this, or where the party's money is going to go

And what McCain is offering is four more years of George Bush. He wants to extend the Bush tax cuts

Howard Brush Dean III (born November 17, 1948) is an American politician and physician from the U.S. state of Vermont. He served six terms as the 79th Governor of Vermont and ran unsuccessfully for the 2004 Democratic presidential nomination. He was chairman of the Democratic National Committee from 2005 to 2009. Although his U.S. Presidential campaign was unsuccessful, Dean is regarded as a pioneer in raising the profile of internet based fundraising and grassroots organizing.

Before entering politics, Dean earned his medical degree from the Albert Einstein College of Medicine in 1978. Dean was elected to the Vermont House of Representatives as a Democrat in 1982 and was elected lieutenant governor in 1986. Both were part-time positions that enabled him to continue practicing medicine. In 1991, Dean became governor of Vermont when Richard A. Snelling died in office. Dean was subsequently elected to five two-year terms, serving from 1991 to 2003, making him the second longest-serving governor in Vermont history, after Thomas Chittenden (1778–1789 and 1790–1797). Dean served as chairman of the National Governors Association from 1994 to 1995; during his term, Vermont paid off much of its public debt and had a balanced budget 11 times, lowering income taxes twice. Dean also oversaw the expansion of the "Dr. Dynasaur" program, which ensures universal health care for children and pregnant women in the state. He is a noted staunch supporter of universal health care.

An early front-runner for the 2004 Democratic presidential nomination, Dean denounced the 2003 invasion of Iraq and called on Democrats to oppose the Bush administration. Dean showed fundraising ability, and was a pioneer of political fundraising via the Internet; however, he lost the nomination to Senator John Kerry of Massachusetts. Dean formed the organization Democracy for America and later was elected chairman of the Democratic National Committee in February 2005. As chairman of the party, Dean created and employed the 50 State Strategy that attempted to make Democrats competitive in normally conservative states often dismissed in the past as "solid red." The success of the strategy became apparent after the 2006 midterm elections, where Democrats took back the House and picked up seats in the Senate from normally Republican states such as Missouri and Montana. In the 2008 election, Barack Obama used The 50 state strategy as the backbone of his candidacy.

FULL ARTICLE AT WIKIPEDIA.ORG
This article is licensed under the GNU Free Documentation License.
It uses material from the Wikipedia article "Howard Dean."
Back to Article
/