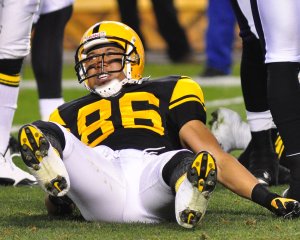 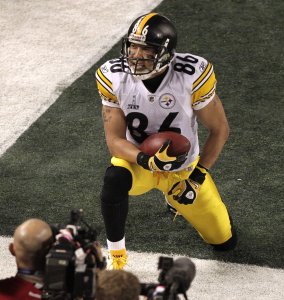 NFL // 2 years ago
NFL notebook: Bucs' Vea will not play vs. Steelers
The Tampa Bay Buccaneers will not get a chance Monday night to see their first-round pick, massive defensive tackle Vita Vea, in game action.

NFL // 2 years ago
Ward 'embarrassed' by actions of Steelers WR Brown
Pittsburgh Steelers wide receiver Antonio Brown caused a bit of a storm this week with his actions both on and off the field.

NFL // 3 years ago
Neuheisel: Nothing finalized with AAF coaching job
CBS broadcaster Rick Neuheisel downplayed a report that he will be the next coach hired by the Alliance for American Football.

NFL // 3 years ago
Ray Lewis highlights Class of 2018 NFL Hall of Fame semifinalists
The Pro Football Hall of Fame's annual journey toward its next group of Gold Jacket recipients took another step Tuesday when the roster of candidates was reduced to 25 semifinalists -- plus two.

Having a whole week off last week, I've tried to put two weeks of rehab into one week

Having a whole week off last week, I've tried to put two weeks of rehab into one week. I feel good

If I'm the only one getting fined and other players aren't getting fined, that brings up a huge question for me

We showed a lot of character, but we've done that all year

Hines E. Ward, Jr. (born March 8, 1976) is an American football player who currently plays the wide receiver position for the NFL's Pittsburgh Steelers, where he is the longest-tenured current player on the team. He was voted MVP of Super Bowl XL. He played college football at the University of Georgia. Born in Seoul, South Korea to a Korean mother and an African American father, Ward grew up in the Atlanta area. He has become an advocate for the social acceptance of foreigners in Korea, especially mixed-race youth.

Ward was born in Seoul, South Korea, to an African American father, Hines Ward Sr., and Korean mother, Kim Young He. His family moved to Atlanta and East Point, Georgia when Hines Jr. was one, and Hines Sr. went to Germany to serve a tour of duty. The next year Hines' parents divorced, and after Hines Sr. convinced a family court that Kim could not raise Hines Jr. independently, because she did not speak English, Hines Jr. lived with his paternal grandmother Martha Ward until he was seven. Under the guidance of coach Mike Parris at Forest Park High School in Forest Park, Georgia, Ward showcased his athletic skills as a quarterback, and was two-time Clayton County Offensive Player of the Year.

As a wide receiver for the University of Georgia Bulldogs (1994–1997), Ward's 149 career receptions for 1,965 yards placed him second in team history. He also played tailback and totaled 3,870 all-purpose yards, second only to Herschel Walker in Bulldogs history. In 1996, Hines had 52 receptions for 900 yards, and also ran 26 times for 170 yards. In 1997, Hines hauled in 55 passes and scored six TDs, getting All-SEC honors in the process. Ward played some quarterback his sophomore year, and holds Georgia bowl records for Pass Attempts, Pass Completions, and Passing Yards in the 1995 Peach Bowl in which he completed 31 of 59 passes for 413 yards.

FULL ARTICLE AT WIKIPEDIA.ORG
This article is licensed under the GNU Free Documentation License.
It uses material from the Wikipedia article "Hines Ward."
Back to Article
/