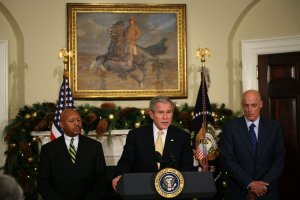 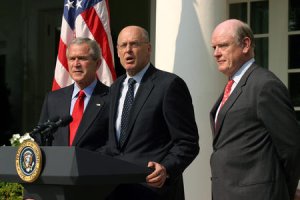 Despite these challenges, Goldman Sachs executed well across its core businesses. Looking ahead, we remain cautious about the near-term outlook

Weakness in the capital markets, compounded by an erosion of corporate and investor confidence, has depressed activity in a number of our most important businesses

While we have seen some encouraging economic data of late, the current environment remains very challenging

Henry Merritt "Hank" Paulson Jr. (born March 28, 1946) served as the 74th United States Treasury Secretary and is a member of the International Monetary Fund Board of Governors. He previously served as the Chairman and Chief Executive Officer of Goldman Sachs. In 2008, Time magazine named Paulson as a runner-up for its Person of the Year 2008, saying, with reference to the Global Financial Crisis of 2008: "if there is a face to this financial debacle, it is now his".

He was born in Palm Beach, Florida, to Marianna Gallauer and Henry Merritt Paulson, a wholesale jeweler. He was raised in Barrington Hills, Illinois, as a Christian Scientist. Paulson attained the rank of Eagle Scout in the Boy Scouts of America.

A star athlete at Barrington High School, Paulson was a champion wrestler and stand-out football player, graduating in 1964. Paulson received his Bachelor of Arts in English from Dartmouth College in 1968; at Dartmouth he was a member of Phi Beta Kappa and Sigma Alpha Epsilon and he was an All Ivy, All East, and honorable mention All American as an offensive lineman.

FULL ARTICLE AT WIKIPEDIA.ORG
This article is licensed under the GNU Free Documentation License.
It uses material from the Wikipedia article "Henry M. Paulson."