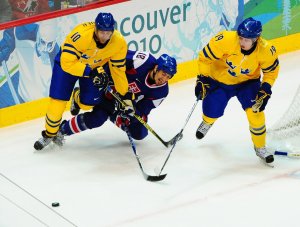 Henrik Tallinder (born January 10, 1979) is a professional ice hockey defenceman who currently plays for the New Jersey Devils of the National Hockey League.

Henrik Tallinder was drafted 48th overall by the Sabres in the 1997 NHL Entry Draft.

Tallinder suffered a broken left arm in game 3 of the Sabres Eastern Conference finals against the Carolina Hurricanes and missed the remainder of the 2006 Stanley Cup Playoffs. At the time of the injury, he was tied for the NHL playoff lead in plus/minus at +14.

FULL ARTICLE AT WIKIPEDIA.ORG
This article is licensed under the GNU Free Documentation License.
It uses material from the Wikipedia article "Henrik Tallinder."