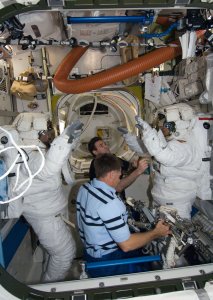 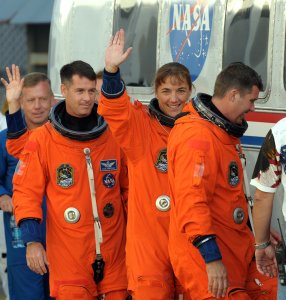 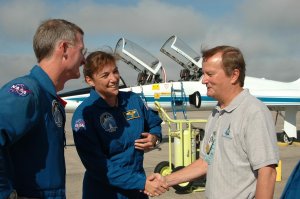 Heidemarie Martha Stefanyshyn-Piper (born on February 7, 1963) is an American Naval officer and a NASA astronaut. Heide Piper has achieved the rank of captain in the United States Navy. Heidemarie is also a qualified and experience salvage officer. Her major salvage projects include de-stranding the Exxon Houston off the coast of Barber's Point, on the island of Oahu, Hawaii, and developing the plan for the Peruvian Navy salvage of the Peruvian submarine Pacocha. Piper has also received numerous honors and awards, such as the Meritorious Service Medal, two Navy Commendation Medals, two Navy Achievement Medals and many other awards. She has flown on two space shuttle missions, STS-115 and STS-126. During which time she has completed five spacewalks totaling 33 hours and 42 minutes, putting her 25th on the all-time on the list of space walkers by duration.

Stefanyshyn-Piper was born in St. Paul, Minnesota, United States, North America. Of Ukrainian-American heritage, Stefanyshyn-Piper graduated in 1980 from what was then the all-girls Derham Hall High School in St. Paul, Minnesota, and holds Bachelor of Science (1984) and Master of Science (1985) degrees in mechanical engineering from MIT. She is a licensed Amateur radio operator (ham) with Technician License KD5TVR.

Stefanyshyn-Piper received her commission from the Navy ROTC Program at MIT in June 1985. She completed training at the Naval Diving and Salvage Training Center in Panama City, Florida as a Navy Basic Diving Officer and Salvage Officer. During her Salvage tour, she participated in the de-stranding of the tanker Exxon Houston off the coast of Barber's Point, on the island of Oahu, Hawaii. Stefanyshyn-Piper is currently a Captain in the United States Navy.

FULL ARTICLE AT WIKIPEDIA.ORG
This article is licensed under the GNU Free Documentation License.
It uses material from the Wikipedia article "Heidemarie Stefanyshyn."
Back to Article
/