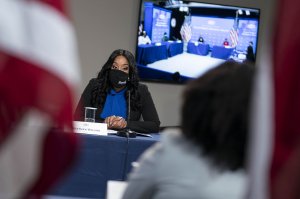 U.S. News // 2 years ago
Nominee for No. 2 Pentagon post denies sex assault accusation
Air Force Gen. John Hyten denied accusations Tuesday he forcibly kissed a female colonel and pressed himself against her, charges that have drawn controversy for his nomination to be vice chairman of the Joint Chiefs.

Voices // 2 years ago
Military getting serious about gaming
The Millennial generation has grown up on devices. Due to this reality, they require a different form of workforce training. Even the military is moving toward incorporating gaming into its training programs.

Defense News // 3 years ago
New post-hurricane repair work at Tyndall Air Force Base halted as funds run out
Rebuilding of Tyndall AFB, Fla., which sustained $5 billion in damage in 2018 from Hurricane Michael, stopped on Wednesday due to a lack of funding for the work from Congress.

Bill Richardson has said we should open another channel of communication-- well, send him as part of the delegation

Heather A. Wilson (born December 30, 1960), is a former Republican member of the United States House of Representatives representing New Mexico's 1st congressional district from 1998 to 2009. She is the second female veteran to have been elected to Congress. Much of Wilson's legislative focus has been on national security issues. She opted not to run for re-election to the House in 2008 and sought the U.S. Senate seat of retiring Senator Pete Domenici but finished second in the Republican primary to Congressman Steve Pearce, who then lost the general election to Democrat Tom Udall. On March 7, 2011, she announced another run for Senate in 2012 to replace retiring Senator Jeff Bingaman.

Upon leaving the Air Force in 1989, Wilson became Director for European Defense Policy and Arms Control on the National Security Council. After leaving government, she founded Keystone International, Inc. in 1991 to promote business development in the United States and Russia. She was the Secretary of the New Mexico Children, Youth and Family Department under Governor Gary Johnson.

FULL ARTICLE AT WIKIPEDIA.ORG
This article is licensed under the GNU Free Documentation License.
It uses material from the Wikipedia article "Heather Wilson."