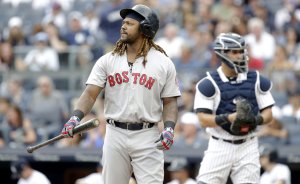 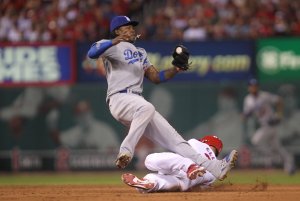 MLB // 3 years ago
Indians activate SS Francisco Lindor off 10-day IL
Cleveland Indians shortstop Francisco Lindor has been activated off the 10-day injured list, and will be in the team's lineup Saturday.

MLB // 3 years ago
Rockies going full throttle vs. Phillies to bolster playoff hopes
DENVER -- As a result of being forced to alter their rotation, the Colorado Rockies will start Chad Bettis on Tuesday in what will become a bullpen game against the Philadelphia Phillies.

MLB // 4 years ago
Red Sox hope hits keep coming against Mariners
The Boston Red Sox send a new ace to the mound in the second game of a three-game series with the Seattle Mariners on Saturday night.

MLB // 4 years ago
Braves make rotation change for opener vs. Red Sox
BOSTON -- Massachusetts native Sean Newcomb was in line to make a homecoming start for the Atlanta Braves at Fenway Park on Friday night.

MLB // 4 years ago
Red Sox still share first as they host Orioles
BOSTON - While the Yankees haven't played an entire game since Sunday, the Boston Red Sox have managed to play their way out of and then back into a first-place tie with New York in American League East.

MLB // 4 years ago
Chris Sale hopes to be stopper as Boston Red Sox host Oakland A's
Chris Sale is on the kind of early run that has people thinking Cy Young Award for the left-hander.

MLB // 4 years ago
Boston Red Sox get another crack at Sean Manaea
The last time Sean Manaea saw the Boston Red Sox, he tossed the 12th no-hitter in Philadelphia/Kansas City/Oakland Athletics history at them.

Hanley Ramírez (born December 23, 1983 in Samaná, Dominican Republic) is a shortstop in Major League Baseball for the Florida Marlins. Ramírez was named 2006 NL Rookie of the Year by the Baseball Writers Association of America. In 2009, Ramírez won the NL batting title and is a three-time All-Star starter. Additionally, Ramirez finished runner-up in the 2010 Home Run Derby.

Ramírez signed with the Boston Red Sox as an International Free Agent in July 2000. He was discovered by scouts and was considered the top prospect in the Boston Red Sox organization. He was traded to the Florida Marlins in 2005 together with Aníbal Sánchez for Josh Beckett, Mike Lowell and Guillermo Mota.

During Spring Training in 2006, Ramírez was impressive enough to earn the starting shortstop job for the Marlins over another candidate, shortstop Robert Andino. Ramírez led all MLB rookies with 185 hits, 119 runs, 11 triples and 51 SBs. He hit 7 leadoff home runs, the most in team history for a season and career.

FULL ARTICLE AT WIKIPEDIA.ORG
This article is licensed under the GNU Free Documentation License.
It uses material from the Wikipedia article "Hanley Ramirez."