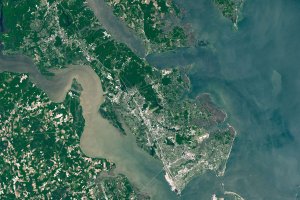 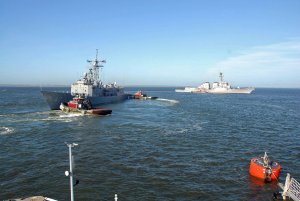 Defense News // 11 months ago
U.S. Navy, Marine Corps set deadline for mandatory COVID-19 vaccinations
All active duty and reserve service members of the U.S. Navy and Marine Corps must be fully vaccinated against COVID-19 by the end of the year, according to memos issued by each branch.

Defense News // 1 year ago
NAS Oceana Air Show to be broadcast online
The annual air show at Naval Air Station Oceana in Virginia will be a virtual event this year, officials announced Thursday.

World News // 2 years ago
Remnants of Dorian off Canada, will move to Britain this week
After brushing past the Northeast, Hurricane Dorian is expected to make landfall in Atlantic Canada late Saturday or Saturday night, just about two weeks after the storm sprung to life in the Caribbean.

Hampton Roads is the name for both a body of water and the Norfolk-Virginia Beach metropolitan area which surrounds it in southeastern Virginia, United States. Hampton Roads is notable for its year-round ice-free harbor, for United States Navy, Coast Guard, Air Force, NASA, Marines, and Army facilities, shipyards, coal piers, and hundreds of miles of waterfront property and beaches, all of which contribute to the diversity and stability of the region's economy.

The water area known as Hampton Roads is one of the world's biggest natural harbors (more accurately a roadstead or "roads"), and incorporates the mouths of the Elizabeth River and James River with several smaller rivers and itself empties into the Chesapeake Bay near its mouth leading to the Atlantic Ocean.

FULL ARTICLE AT WIKIPEDIA.ORG
This article is licensed under the GNU Free Documentation License.
It uses material from the Wikipedia article "Hampton Roads."