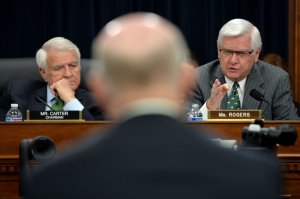 Harold Dallas "Hal" Rogers (born December 31, 1937) is the U.S. Representative for Kentucky's 5th congressional district, serving since 1981. He is a member of the Republican Party.

Rogers was born in Barrier, Kentucky, attended Western Kentucky University in Bowling Green and received a baccalaureate degree (A.B.) and a law degree (LL.B.) from the University of Kentucky at Lexington. Rogers served in the Kentucky and North Carolina Army National Guard. The January 1961 Kentucky Guardsman reported a story noting Harold Rogers recognition in his selection as soldier of the year, stating, "Specialist Fourth Class Harold (Hal) Rogers has been named “Soldier of the Year” by vote of the 125 member Battery A of the Fifth Observation Battalion at Lexington. Rogers, 22, a journalism major at the University of Kentucky, was cited for his performance with his unit during regular weekly drills and the 1960 ANADUTRA (annual active duty for training)."

As a lawyer Rogers was in private practice and was elected to serve as Commonwealth's Attorney for Pulaski and Rockcastle counties in Kentucky, an office he held from 1969 to his election to Congress in 1980. Rogers was the Republican nominee for Lieutenant Governor of Kentucky in 1979, slating with former Governor of Kentucky Louie B. Nunn of Glasgow and losing in the general election to Democrat John Y. Brown Jr. The following year Rogers won election to Congress.

FULL ARTICLE AT WIKIPEDIA.ORG
This article is licensed under the GNU Free Documentation License.
It uses material from the Wikipedia article "Hal Rogers."
Back to Article
/