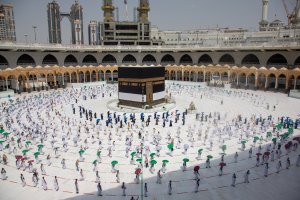 World News // 1 week ago
Muslims worldwide celebrate start of 'Festival of Sacrifice'
Millions of Muslims across the world are celebrating Eid al-Adha, a religious festival at the end of the annual Hajj pilgrimage. 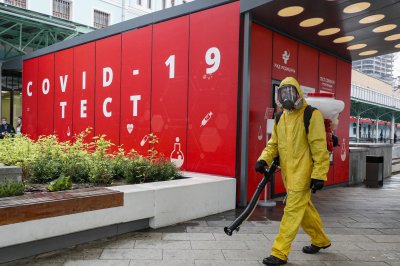 World News // 11 months ago
Hajj pilgrims make trek to Mount Arafat amid COVID-19 safeguards
Doctor-staffed clinics were put into service on the plains of Mount Arafat in Saudi Arabia to handle Hajj pilgrims converging there Thursday.

World News // 1 year ago
Saudi Arabia closes Hajj pilgrimage in Mecca to foreign visitors
Saudi Arabia said it won't allow international travelers to make a sacred Hajj pilgrimage to Mecca next month due to coronavirus concerns, a move that will exclude potentially millions of worshipers.

World News // 1 year ago
Saudi Arabia to ease some restrictions this week, the rest in June
Officials in Saudi Arabia said Tuesday they will relax coronavirus-related curfews and other restrictions for most of the country this week and they will be fully lifted nationwide next month.

World News // 1 year ago
Saudi Arabia bans travel to pilgrimage sites Mecca, Medina due to coronavirus
Saudi Arabia on Wednesday issued a temporary ban against Islamic religious pilgrimages to Mecca and a holy site in Medina, a measure to prevent further spread of the coronavirus.

World News // 1 year ago
Two injured, including gunman, during mosque shooting in Norway
At least two people were injured Saturday when a shooter armed with multiple weapons opened fire at a mosque outside the Norwegian capital.

If it's something that has synergy, we're going to do it

The importance of the summit is that it would boost the idea that Lebanon is safe and stable, meaning good for tourism and investment

The Hajj (Arabic: حج‎ Ḥaǧǧ) is a pilgrimage to Mecca (Makkah). It is the largest annual pilgrimage in the world, and is the fifth pillar of Islam, an obligation that must be carried out at least once in their lifetime by every able-bodied Muslim who can afford to do so. The Hajj is a demonstration of the solidarity of the Muslim people, and their submission to Allah(God). The pilgrimage occurs from the 7th to 10th day of Dhu al-Hijjah, the 12th month of the Islamic calendar. Because the Islamic calendar is a lunar calendar, eleven days shorter than the Gregorian calendar used in the Western world, the Gregorian date of the Hajj changes from year to year. In 2007, the Hajj was from December 17–21; in 2008 from December 6–10, and in 2009 will be November 25–29. Ihram is the name given to the special state in which Muslims live whilst on the pilgrimage.

The Hajj is associated with the life of Muhammad from the 7th century, but the ritual of pilgrimage to Mecca is considered by Muslims to stretch back thousands of years to the time of Ibrahim (Abraham). Pilgrims join processions of hundreds of thousands of people, who simultaneously converge on Mecca for the week of the Hajj, and perform a series of rituals: Each person walks counter-clockwise seven times about the Ka'bah, the cube-shaped building which acts as the Muslim direction of prayer; kisses the Black Stone in the corner of the Kaaba; runs back and forth between the hills of Al-Safa and Al-Marwah; drinks from the Zamzam Well; goes to the plains of Mount Arafat to stand in vigil; and throws stones in a ritual Stoning of the Devil. The pilgrims then shave their heads, perform a ritual of animal sacrifice, and celebrate the three day global festival of Eid al-Adha.

FULL ARTICLE AT WIKIPEDIA.ORG
This article is licensed under the GNU Free Documentation License.
It uses material from the Wikipedia article "Hajj."
Back to Article
/