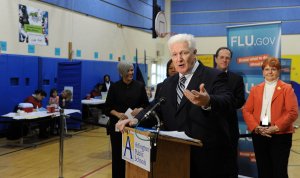 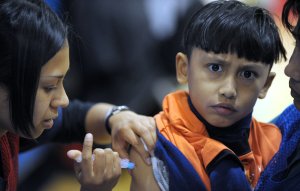 Health News // 5 months ago
Flu vaccine may not protect against main flu strain, study says
This season's flu vaccine may do little to prevent infection with the main circulating virus strain because the strain has changed since the vaccine was developed, a new study suggests.

U.S. News // 5 months ago
CDC warns of rising flu infection rates among young people
The Centers for Disease Control and Prevention on Wednesday warned of an increase of influenza cases in recent weeks with 90% of cases among children and adults aged 5-24.

Science News // 7 months ago
Smartwatches detect viral infection before symptoms surface in study
In a small study, researchers showed that a wearable device, like a Fitbit or Apple Watch, could detect which patients had the H1N1 flu and which had a common cold.

U.S. News // 7 months ago
U.S. COVID-19 death toll surpasses total of 1918 Spanish flu pandemic
The death toll from COVID-19 surpassed that of the 1918 Spanish flu outbreak Monday, making it the deadliest pandemic in U.S. history, according to a count compiled by Johns Hopkins University.

World News // 9 months ago
Chinese billionaire gets prison for 'picking quarrels and provoking trouble'
A Chinese court on Thursday sentenced an outspoken billionaire businessman to nearly 20 years in prison for "provoking" trouble and conspiring to oppose state institutions.

Health News // 1 year ago
Most with mild COVID-19 still need care months later, CDC reports
Nearly 70% of adults with COVID-19 who don't require hospital care visit a healthcare provider at least once one to six months after diagnosis due to lingering symptoms of the virus, according to CDC data.

For people who are really caught on a weekly income, if they can't make a go of it, they might say, 'I'm desperate. I'm going to do what I have to do, and I'm going into work even though I'm sick,

As I said when we saw the first cases of this virus back in the spring, I don't want anybody to be alarmed, but I do want everybody to be prepared

Influenza A (H1N1) virus is a subtype of influenza A virus and was the most common cause of human influenza (flu) in 2009. Some strains of H1N1 are endemic in humans and cause a small fraction of all influenza-like illness and a small fraction of all seasonal influenza. H1N1 strains caused a few percent of all human flu infections in 2004–2005. Other strains of H1N1 are endemic in pigs (swine influenza) and in birds (avian influenza).

In June 2009, the World Health Organization declared the new strain of swine-origin H1N1 as a pandemic. This strain is often called swine flu by the public media. This novel virus spread worldwide and had caused about 17,000 deaths by the start of 2010.

FULL ARTICLE AT WIKIPEDIA.ORG
This article is licensed under the GNU Free Documentation License.
It uses material from the Wikipedia article "H1N1."