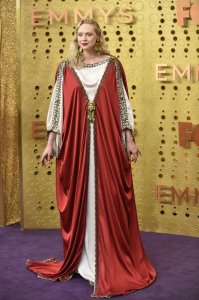 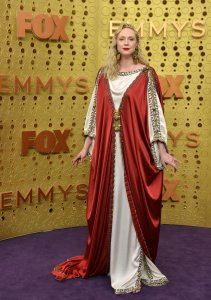 TV // 2 months ago
'American Gods': Starz cancels series after three seasons
"American Gods," starring Ricky Whittle and Ian McShane, won't return for Season 4 but may be getting a TV movie.

TV // 2 years ago
Sophie Turner, Emilia Clarke reflect on 'Game of Thrones' as series winds down
Several stars of "Game of Thrones" took to social media Sunday to mark the end of their beloved medieval fantasy drama.

Gwendoline Christie (born 28 October 1978) is an English model and actress. She is known for portraying the warrior Brienne of Tarth in the HBO fantasy-drama series Game of Thrones and Lexi in the science fantasy series Wizards vs Aliens. In film, Christie started with minor roles in the Terry Gilliam films The Imaginarium of Doctor Parnassus and The Zero Theorem, and will appear as Commander Lyme in The Hunger Games: Mockingjay - Part 2 and in Star Wars: The Force Awakens as Captain Phasma.

FULL ARTICLE AT WIKIPEDIA.ORG
This article is licensed under the GNU Free Documentation License.
It uses material from the Wikipedia article "Gwendoline Christie."
Back to Article
/