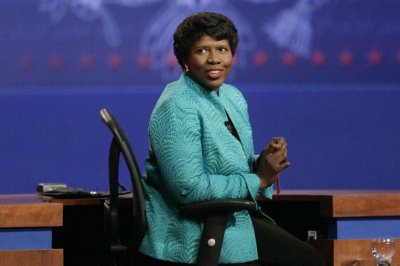 Gwendolyn Louise Ifill (pronounced /ˈaɪfəl/, us dict: gwĕn′də·lĭn ī′·fəl) (born September 29, 1955) is an American journalist, television newscaster and author. She is the managing editor and moderator for Washington Week (PBS) and a senior correspondent for The NewsHour (PBS). She is a political analyst, and moderated the 2004 and 2008 Vice Presidential debates. She is the author of the book The Breakthrough: Politics and Race in the Age of Obama.

Ifill was born in New York City, the sixth child of African Methodist Episcopal minister, (Oliver) Urcille Ifill, Sr., a Panamanian of Barbadian descent who emigrated from Panama, and Eleanor Ifill, who was also from Barbados. Her father's ministry required the family to live in several cities throughout New England and the Eastern Seaboard during her youth. In her childhood Ifill lived in Pennsylvania and Massachusetts church parsonages and in federally subsidized housing in Buffalo and New York City. She graduated with a Bachelor of Arts in Communications from Simmons College in Boston, Massachusetts in 1977.

Ifill first interned for the Boston Herald where she was later hired as an apology by editors after a co-worker left a note for her that said "Nigger go home." Later she worked for the Baltimore Evening Sun (1981-1984), The Washington Post (1984-1991), The New York Times (1991-1994), and NBC. In October 1999, she became moderator of the PBS program Washington Week in Review. She is also senior correspondent for the NewsHour with Jim Lehrer. Ifill has appeared on various news shows, including Meet the Press.

FULL ARTICLE AT WIKIPEDIA.ORG
This article is licensed under the GNU Free Documentation License.
It uses material from the Wikipedia article "Gwen Ifill."
Back to Article
/