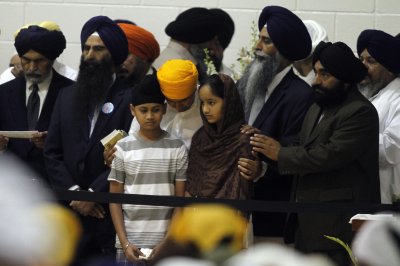 Top News // 3 years ago
The Almanac
On August 5, 2012, a gunman described as a white supremacist shot six people to death, wounded four others, then killed himself at a Sikh temple in Wisconsin.

Henri René Albert Guy de Maupassant (pronounced ) (5 August 1850 – 6 July 1893) was a popular 19th-century French writer and considered one of the fathers of the modern short story.

A protégé of Flaubert, Maupassant's stories are characterized by their economy of style and their efficient, effortless dénouement. Many of the stories are set during the Franco-Prussian War of the 1870s and several describe the futility of war and the innocent civilians who, caught in the conflict, emerge changed. He also wrote six short novels.

Maupassant was most likely born at the Chateau de Miromesnil, near Dieppe in the Seine-Inférieure (now Seine-Maritime) department. The Maupassants were an old Lorraine family who had settled in Normandy in the middle of the 18th century. In 1846 his father had married Laure Le Poittevin. With her brother Alfred, she had been the playmate of the novelist Gustave Flaubert, who was destined to have a guiding influence on her son's life. She was a woman of no common literary accomplishments, but was very fond of classic literature, especially Shakespeare. After separating from her husband, Le Poittevin kept her two sons, the elder Guy and younger Hervé.

FULL ARTICLE AT WIKIPEDIA.ORG
This article is licensed under the GNU Free Documentation License.
It uses material from the Wikipedia article "Guy de Maupassant."
Back to Article
/