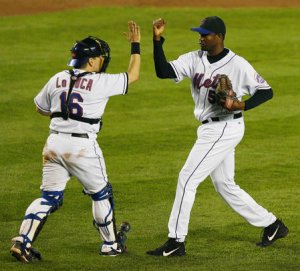 Guillermo Reynoso Mota (born July 25, 1973) is a Major League Baseball relief pitcher for the San Francisco Giants. He throws and bats right-handed. Previously, he has played for the Montreal Expos, the Los Angeles Dodgers, the Florida Marlins, the Cleveland Indians, the New York Mets, and the Milwaukee Brewers.

Mota throws three pitches: a fastball, a slider, and a change-up.

Mota was born on July 25, 1973, in San Pedro de Macorís, located in the Dominican Republic. As a youth, he attended Jose Joaquin Perez High School. After high school, he was signed by the New York Mets on September 7, 1990, by scout Eddy Toledo.

FULL ARTICLE AT WIKIPEDIA.ORG
This article is licensed under the GNU Free Documentation License.
It uses material from the Wikipedia article "Guillermo Mota."
Back to Article
/