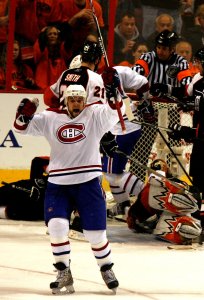 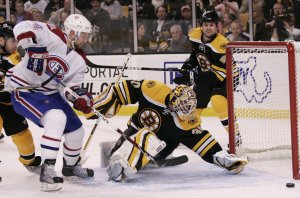 Guillaume Latendresse (born May 24, 1987, in Sainte-Catherine, Québec) is a Canadian professional ice hockey player. He currently plays at the forward position for the Minnesota Wild. He was drafted by the Montreal Canadiens in the 2005 NHL Entry Draft, 2nd round (45th overall).

Latendresse, a power forward, was the 2nd overall choice in 2003 QMJHL's entry draft by the Drummondville Voltigeurs, just after Sidney Crosby. He played three seasons with the Voltigeurs. Latendresse went to the Montreal Canadiens' training camp in 2005. The Canadiens returned him to the Voltigeurs. He made the Canadian World Junior team that won the gold medal in 2005 but head coach Brent Sutter felt that Latendresse was always on his own page and he had him benched for most of the tournament. Latendresse tried out several times, again for the 2006 World Junior Team, but he was cut due to a concussion he sustained after being elbowed in the head by Steve Downie, a Canadian junior player.

Latendresse's training camp in 2006 prompted Canadiens' coach Guy Carbonneau to give the 19-year-old a roster spot on September 29, and General Manager Bob Gainey made Carbonneau's decision official by signing Latendresse to a three-year deal worth $850,000 US per year - the NHL rookie maximum.

FULL ARTICLE AT WIKIPEDIA.ORG
This article is licensed under the GNU Free Documentation License.
It uses material from the Wikipedia article "Guillaume Latendresse."
Back to Article
/