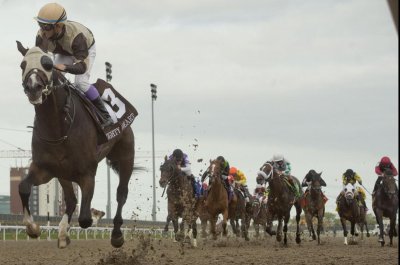 Sports News // 1 month ago
Prep races for the Arc, Breeders' Cup dominate weekend horse racing
A fascinating weekend included six "Win and You're In" races for the November Breeders' Cup World Championships and the long-feared announcement the event will be run Nov. 6-7 without fans in the stands at Keeneland.

Sports News // 4 months ago
Big guns return to the track in weekend horse racing
Horse racing breaks well free of the COVID-19 pandemic restrictions this weekend -- albeit without fans -- with the first of the British Classics, the Santa Anita Derby and important races in newly reopened Belmont Park.

Sports News // 1 year ago
Final qualifiers for Breeders' Cup on display in horse racing this weekend
The final big weekend of qualifiers for the Breeders' Cup shares billing with Europe's biggest race as Enable shoots for her third straight win in the Prix de l'Arc de Triomphe.

Sports News // 1 year ago
Hong Kong season opens smoothly in weekend horse racing
Godolphin suddenly seems to have a live chance for the Arc after a dramatic win in Germany; Hong Kong seaon opens smoothly despite unrest; potential 2-year-old stars in action in Japan and Ireland -- all in the weekend's 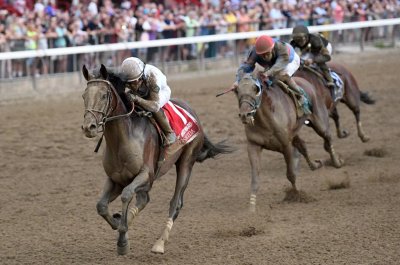 Horse Racing // 3 years ago
UPI Horse Racing Weekend Preview
Gun Runner heads the field for the Woodward at Saratoga, Kentucky Downs kicks off its iconic meeting and Breeders' Cup berths are up for grabs from Germany to New York -- all in weekend Thoroughbred racing.

The Grosser Preis von Baden is a Group 1 flat horse race in Germany which is open to thoroughbreds aged three years or older. It is run at Baden-Baden over a distance of 2,400 metres (about 1½ miles), and it is scheduled to take place each year in early September.

The event was established in 1858, and it was originally contested over 3,200 metres. It was founded by Edouard Bénazet (1801–1867), a French businessman who was the manager of the Casino Baden-Baden. The inaugural running was part of a three-day festival to mark the opening of Iffezheim Racecourse.

FULL ARTICLE AT WIKIPEDIA.ORG
This article is licensed under the GNU Free Documentation License.
It uses material from the Wikipedia article "Grosser Preis von Baden."
Back to Article
/