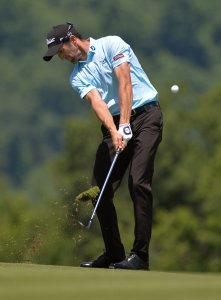 Sports News // 6 years ago
Rory McIlroy up by three in rainy Irish Open
Rory McIlroy, who hasn't won since late last year, has a chance to break through before the home fans.

Grégory Bourdy (born 25 April 1982) is a French professional golfer who competes on the European Tour.

Bourdy was born in Bordeaux. He turned professional in 2003. His cousin Nicolas Beaufils is also a professional golfer, who has played on the Challenge Tour.

Bourdy has played on the European Tour full time since 2005, having previously competed on the second-tier Challenge Tour. Bourdy won his first European Tour event on 28 October 2007 at the Mallorca Classic. That win helped him to finish 39th on the European Tour's Order of Merit list, the first time he had broken the top 100. He has been the highest ranked French golfer on the Official World Golf Rankings.

FULL ARTICLE AT WIKIPEDIA.ORG
This article is licensed under the GNU Free Documentation License.
It uses material from the Wikipedia article "Gregory Bourdy."