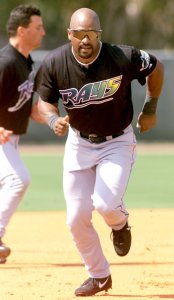 TV // 9 months ago
'Queen Sugar' gets sixth season at OWN
"Queen Sugar" creator Ava DuVernay announced Thursday that the show was renewed for a sixth season.

Gregory Lamont Vaughn (born July 3, 1965) is a former Major League Baseball left fielder and right-handed batter who played for the Milwaukee Brewers (1989-96), San Diego Padres (1996-98), Cincinnati Reds (1999), Tampa Bay Devil Rays (2000-02) and Colorado Rockies (2003). He was born in Sacramento, California, where he attended Kennedy High. He then attended the University of Miami's heralded baseball program. He is the cousin of fellow former Major Leaguer, Mo Vaughn.

Vaughn was selected by the Brewers in the first round (4th pick) of the 1986 amateur draft. A slugger whose batting average dropped below .250 as often as rising above it, he compensated with excellent power. He had three seasons with at least 100 runs batted in, and four with 30 or more home runs - including the legendary 1998 season, when he hit 50 to finish 4th in the major leagues behind Ken Griffey, Jr., Sammy Sosa, and Mark McGwire, who set the home run record that season. In 1999, he became the only player in major league history to be traded after a 50-homer season when the Padres traded him to the Cincinnati Reds. With the Reds in 1999, he hit 45 homers and became the second player in major league history to hit 40 or more homers in consecutive seasons with two different teams (one year after Andrés Galarraga became the first).

FULL ARTICLE AT WIKIPEDIA.ORG
This article is licensed under the GNU Free Documentation License.
It uses material from the Wikipedia article "Greg Vaughn."
Back to Article
/