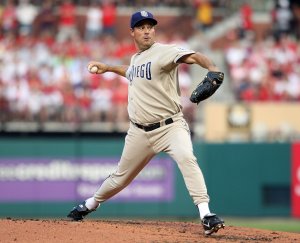 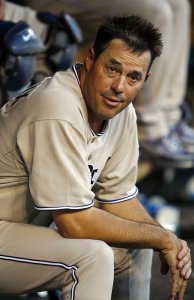 MLB // 2 years ago
Kris Bryant pretends to be pizza guy, pranks fantasy league
Chicago Cubs star -- and prankster -- Kris Bryant was at it again recently, fooling fans by dressing up as a pizza guy.

Top News // 3 years ago
On This Day: LBJ calls for 'War on Poverty'
On Jan. 8, 1964, President Lyndon B. Johnson declared a "War on Poverty" in the United States during his first State of the Union address.

MLB // 3 years ago
Chicago Cubs' Kris Bryant fields flaming grounders for Red Bull
You would think Kris Bryant would have a contract clause against fielding flaming baseballs, but the Chicago Cubs third baseman recently did just that.

Top News // 4 years ago
The Almanac
On Jan. 8, 1918, U.S. President Woodrow Wilson delivered his Fourteen Points during a speech to a joint session of the U.S. Congress.

I'm just here to say thank you to everyone in baseball

I'm very proud of what I did on the baseball field, but I'd like to think I'm the same person I was 20 years ago

Gregory Alan "Greg" Maddux (born April 14, 1966) is a former Major League Baseball pitcher. He was the first pitcher in major league history to win the Cy Young Award for four consecutive years (1992-1995), a feat matched only by Randy Johnson (1999-2002). During those four consecutive seasons, Maddux had a 75-29 record with a 1.98 ERA, while allowing less than one runner per inning.

Maddux is the only pitcher in MLB history to win at least 15 games for 17 straight seasons. In addition, he was awarded a record eighteen Gold Gloves. A superb control pitcher, Maddux won more games during the 1990s than any other pitcher, and is 8th on the all-time career wins list, with 355. Since the start of the post-1920 live-ball era, only Warren Spahn (363) recorded more career wins than Maddux. He currently works in the Cubs' front office.

Maddux was born in San Angelo, Texas, but spent much of his childhood in Madrid, Spain, where the United States Air Force had stationed his father. His father exposed him to baseball at a rather young age, and kindled his passion for the sport. Upon his return to Las Vegas, Nevada, Maddux and his brother Mike trained under the supervision of Rusty Medar, a former scout from the majors. Medar preached the value of movement and location above velocity, and advised throwing softer when in a jam instead of harder; Maddux would later say, "I believed it. I don't know why. I just did." Though Medar died before Maddux graduated from Valley High School in Las Vegas, he instilled a firm foundation that would anchor Maddux’s future career. Maddux currently lives in the same community.

FULL ARTICLE AT WIKIPEDIA.ORG
This article is licensed under the GNU Free Documentation License.
It uses material from the Wikipedia article "Greg Maddux."
Back to Article
/