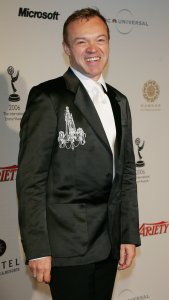 Graham William Walker (born 4 April 1963) is an Irish actor, comedian, television presenter and columnist, known by his stage name Graham Norton. He is the host of the comedy chat show The Graham Norton Show and the BBC commentator of the Eurovision Song Contest.

Norton was born in Clondalkin, a suburb of Dublin, but grew up in Bandon, County Cork, Republic of Ireland. He was brought up Protestant.

In 1992 his stand-up comedy drag act in the Edinburgh Festival Fringe as a tea-towel clad Mother Teresa of Calcutta made the press when Scottish Television's religious affairs department mistakenly thought he represented the real Mother Teresa.

FULL ARTICLE AT WIKIPEDIA.ORG
This article is licensed under the GNU Free Documentation License.
It uses material from the Wikipedia article "Graham Norton."