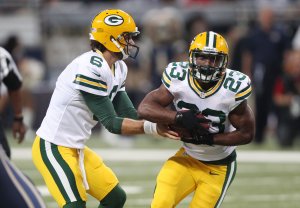 Graham Harrell (born May 22, 1985) is an American football quarterback for the Green Bay Packers of the National Football League. He was signed by the Saskatchewan Roughriders as a street free agent in 2009. He played college football at Texas Tech.

Harrell played at Ennis High School in Ennis, Texas, where he was coached by his father, Sam Harrell. He started at quarterback for three seasons and led the Fighting Lions to a state Class 4A title as a sophomore. He also played in the 2004 Oil Bowl, receiving the offensive MVP award.

By the time he graduated, Harrell set Texas high school records in the following categories:

FULL ARTICLE AT WIKIPEDIA.ORG
This article is licensed under the GNU Free Documentation License.
It uses material from the Wikipedia article "Graham Harrell."
Back to Article
/