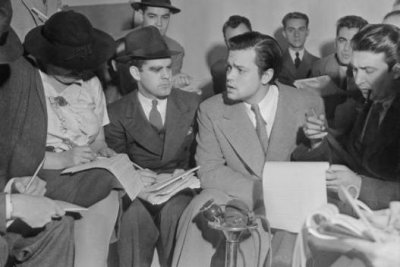 Top News // 3 years ago
The Almanac
On Oct. 30, 1938, Orson Welles triggered a national panic with a realistic radio dramatization of a martian invasion, based on H.G. Wells' "War of the Worlds."

Grace Slick (born Grace Barnett Wing; October 30, 1939) is an American singer and songwriter, who was one of the lead singers of the rock groups The Great Society, Jefferson Airplane, Jefferson Starship, and Starship, and was a solo artist, for nearly three decades, from the mid-1960s to the mid-1990s. Slick was an important figure in the 1960s psychedelic rock genre, and is known for her witty lyrics and powerful contralto vocals.

Grace Slick was born in Evanston, Illinois, to Ivan W. Wing (1907–1987, of Norwegian-Swedish extraction) and his wife, Virginia Barnett (1909–1983, a direct descendant of English Mayflower passengers and also of Irish, and Scottish descent). In 1949, a month before her tenth birthday, her brother Chris Wing was born. Her father was transferred several times when she was a child and, in addition to the Chicago area, she lived in Los Angeles and San Francisco before her family finally settled in Palo Alto, California, south of San Francisco, in the early 1950s. She attended Palo Alto Senior High School before switching to Castilleja High School, a private all-girls school in Palo Alto. Following graduation, she attended Finch College in New York from 1957 to 1958 and the University of Miami in Coral Gables, Florida, from 1958–1959.

Before entering the music scene, Slick was a model for I. Magnin for a short time in the early sixties.

FULL ARTICLE AT WIKIPEDIA.ORG
This article is licensed under the GNU Free Documentation License.
It uses material from the Wikipedia article "Grace Slick."
Back to Article
/