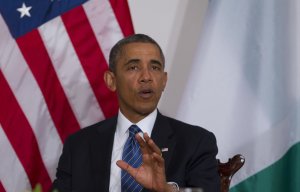 World News // 2 years ago
Muhammadu Buhari re-elected as Nigeria's president
Incumbent Nigerian President Muhammadu Buhari has been elected for a second four-year term, according to the Independent National Electoral Commission.

Top News // 3 years ago
The Almanac
On May 5, 2003, authorities said a two-day wave of tornadoes killed about 40 people in Kansas, Missouri and Tennessee.

Top News // 4 years ago
The Almanac
On May 5, 1925, biology teacher John Scopes was arrested for teaching Darwin's theory of evolution in violation of Tennessee state laws.

World News // 5 years ago
Nigeria says top adviser stole $2.4 billion from military
The president of Nigeria ordered the arrest of a military officer for stealing more than $2 billion slated to be used to fight Boko Haram.

These gallant Nigerian soldiers had just been re-inducted from the AU Peace Mission, where they had served meritoriously, and flown our nation's banner with pride and distinction

You can't provide education, health or security without resources generated from a robust economy

He was Governor of Bayelsa State from 9 December 2005 to 28 May 2007, and was sworn in as Vice President of the Federal Republic of Nigeria on 29 May 2007. Jonathan is a member of the ruling People's Democratic Party (PDP). On 13 January 2010, a federal court handed him the power to carry out state affairs while President Umaru Yar'Adua received medical treatment in a Saudi Arabian hospital. A motion from the Nigerian Senate on 9 February 2010 confirmed these powers to act as President, in recognition of her opinion. On 24 February 2010, Yar'Adua returned to Nigeria, but Jonathan continued as acting president. Upon Yar'Adua's death on 5 May 2010, Jonathan succeeded to the Presidency, taking the oath of office on 6 May 2010.

Jonathan was born in Otueke in Ogbia Local Government Area of the then Eastern Region, later Rivers State, now Bayelsa State to a family of canoe makers. Jonathan holds a B.Sc. degree in Zoology in which he attained Second Class Honours, Upper Division. He also holds an M.Sc. degree in Hydrobiology and Fisheries biology, and a Ph.D. degree in Zoology from the University of Port Harcourt. After obtaining his degree, he worked as an education inspector, lecturer, and environmental-protection officer, until he decided to enter politics in 1998.

FULL ARTICLE AT WIKIPEDIA.ORG
This article is licensed under the GNU Free Documentation License.
It uses material from the Wikipedia article "Goodluck Jonathan."
Back to Article
/