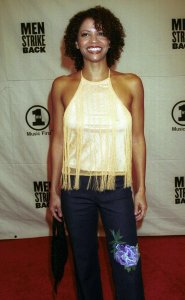 Gloria Reuben (born June 9, 1964) is a Canadian singer and actress of film and television, known for her role on ER.

Reuben was born in Toronto to a gospel singer mother and an architect father. Reuben is the sister of Denis Simpson, an actor and children's television host. Her father is white and her mother is Jamaican. She began learning piano as a child and studied later music technique and theory, ballet and jazz at the Canadian Royal Conservatory. Her career as an actress was triggered by a few jobs as model and TV ad appearances.

Reuben is known for her role on the American television series ER as Jeanie Boulet, a physician assistant in the hospital infected with HIV. She was a guest star throughout Season 1 on ER and was elevated to full-time cast member at the beginning of Season 2. She continued that role until early Season 6, when she departed the show. In 2008, Reuben returned to ER for one episode during its 14th season. She has stated that this role led her to her HIV/AIDS activism.

FULL ARTICLE AT WIKIPEDIA.ORG
This article is licensed under the GNU Free Documentation License.
It uses material from the Wikipedia article "Gloria Reuben."
Back to Article
/