Sports News // 3 weeks ago
Holiday weekend horse racing ends with triple Grade I bang at Santa Anita
Memorial Day racing wound up with a bang at Santa Anita with Smooth Like Strait earning the first U.S. Breeders' Cup "Win and You're In" berth and Country Grammer and Maxim Rate landing the other Group 1 races.

Sports News // 10 months ago
Tiz the Law now even-money Kentucky Derby favorite after Travers romp
Tiz the Law swept to a convincing win in the Travers Stakes at Saratoga during the weekend, confirming his status as the favorite for the Sept. 5 Kentucky Derby.

Sports News // 2 years ago
King for a Day upsets Maximum Security
Weenedin action failed to answer the question of who's the best 3-year-old in American racing as Maximum Security couldn't hold the lead in the Pegasus Stakes.

Sports News // 2 years ago
Surprises mark some headline events in weekend U.S. horse racing
La Force springs the upset in California, Moon Landing lands the Penn Mile in a small surprise, much more from weekend racing from coast to coast 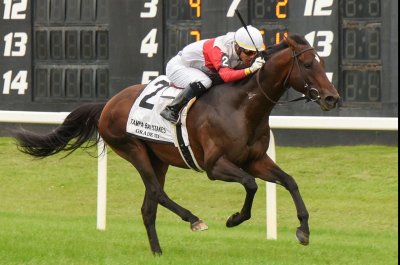 Horse Racing // 2 years ago
U.S. Turf Racing starting 2019 much like the unsettled 'old year'
U.S. turf racing was a mixed bag in 2018, with few able to string together top-level wins, and early returns show 2019 is off on similar footing.

Give him a nice, long rein. He'll relax for you. Sit off the pace and come running

Corbett, as Lincoln Case, replaced George Maharis (who played "Buz Murdock") as Martin Milner's Route 66 co-star during part of the third and fourth, final season of the series (1963–64). Other regular TV roles were as 'Wes Macauley' on It's a Man's World (1962–63), with co-stars Ted Bessell, Randy Boone, and Michael Burns, in the role of Wes's younger brother, Howie. In the 1965-1966 season, Corbett guest starred on the ABC western The Legend of Jesse James. Corbett appeared as Chance Reynolds, a regular cast member on the NBC western The Road West (1966–1967), with co-stars Barry Sullivan, Kathryn Hays, Andrew Prine, Brenda Scott, and Kelly Corcoran. He also played Paul Morgan on CBS's He was featured in 1964 as Dan Collins in an episode of Gunsmoke entitled Chicken ; A man gets an undeserved reputation as a gunman when he's found at a way station with four dead outlaws at his feet. The episode was about pride. In 1971, Corbett had a guest appearance with Mariette Hartley on the Gunsmoke episode entitled "Phoenix".

Corbett played Paul Morgan on the television series Dallas from 1983–1984 and 1986–1988. After his character was written off the show, he stayed with the production company, Lorimar, for three more years as its dialogue director, but he is probably best remembered by science fiction fans for his guest starring role on the second season Star Trek episode "Metamorphosis" as Zefram Cochrane, the inventor of warp drive. Corbett also starred opposite legendary Hollywood actor John Wayne in the 1970 film Chisum as legendary old west sheriff Pat Garrett, opposite Wayne's role as old west rancher John Chisum. He again starred with John Wayne in 1971 in the movie Big Jake as half Apache outlaw O'Brien, opposite Wayne's character as old west rancher Jacob McCandles.

FULL ARTICLE AT WIKIPEDIA.ORG
This article is licensed under the GNU Free Documentation License.
It uses material from the Wikipedia article "Glenn Corbett."
Back to Article
/