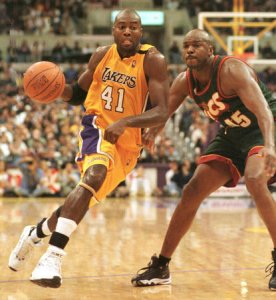 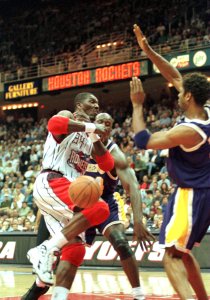 NBA // 4 years ago
Goran Dragic, Miami Heat keep NBA playoff hopes alive with win over Charlotte Hornets
CHARLOTTE, N.C. -- The plan wasn't necessarily for the Miami Heat to sink as many 3-pointers as possible Wednesday. Those simply were the shots available against the Charlotte Hornets.

Glen Anthony Rice (born May 28, 1967, in Flint, Michigan) is a retired American professional basketball player of the NBA. Rice was a three-time NBA All-Star guard/forward well known for his pinpoint shooting accuracy with one of the smoothest shots in the game, ranking 5th in NBA history with 1,559 three-point field goals made during his 15-year career. As a player, Rice has won an NCAA Men's Division I Basketball Championship and an NBA Championship. Rice has won both the NBA All-Star Game MVP and the NCAA Basketball Tournament Most Outstanding Player awards.

Rice played college basketball for the University of Michigan Wolverines for four seasons (1985–1989), a starter for three of those seasons. He became the school's all-time leading scorer with 2,442 points. He led Michigan to the 1989 NCAA Men's Division I Basketball Championship, scoring an NCAA-record 184 points in tournament play, a record that still stands. Rice was also voted the tournament's Most Outstanding Player and was part of the Associated Press All-America second-team, after averaging 25.6 points for the season, while shooting 58% from the floor and 52% from three-point range. After Rice's junior year, he was offered to join the 1988 Olympic basketball team, but was cut before reaching the group of 48. On February 20, 2005, Rice's No. 41 jersey was retired during a ceremony at Michigan's Crisler Arena. Rice made the cover of Sports Illustrated, Volume 70, Issue 16 on April 10, 1989.

Rice started his senior season as a projected mid-first-round selection, but his stock rose to the point where he was selected #4 overall in the 1989 NBA Draft due to his record-breaking performance in the NCAA Tournament. The Miami Heat, an expansion to the NBA along with the Charlotte Hornets, were now in their second-year in need of some offensive help after finishing last in the NBA in points per game in 1988-89.

FULL ARTICLE AT WIKIPEDIA.ORG
This article is licensed under the GNU Free Documentation License.
It uses material from the Wikipedia article "Glen Rice."
Back to Article
/