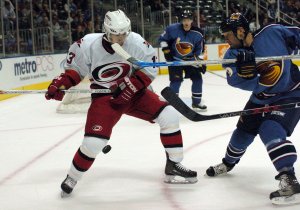 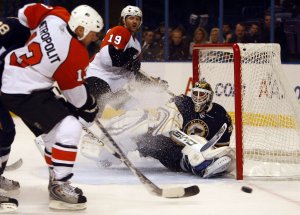 Metropolit started out playing for the Nashville Knights in the ECHL in the 1995–96 season. He also played for the Pensacola Ice Pilots and Grand Rapids Griffins before making his NHL debut in 1999–2000 for the Washington Capitals. For the next three seasons, he alternated between the Capitals and the AHL's Portland Pirates, and also played two games for Tampa Bay in 2001–02.

In 2003 Metropolit crossed the Atlantic to play in Helsinki with Jokerit for the 2003–04 season. In a brilliant first season, he scored the most points on the team, 50, with 15 goals and 35 assists, the fifth-highest total during the regular season. He scored six goals during seven playoff games that year, but Jokerit were eliminated in the quarterfinals.

FULL ARTICLE AT WIKIPEDIA.ORG
This article is licensed under the GNU Free Documentation License.
It uses material from the Wikipedia article "Glen Metropolit."
Back to Article
/