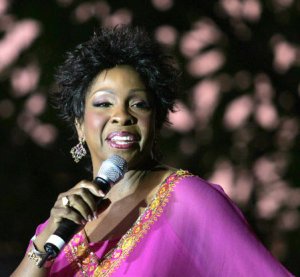 Music // 1 year ago
Chloe X Halle to perform 'America The Beautiful' at Super Bowl, says NFL
The NFL has confirmed that sister duo Chloe X Halle will perform "America the Beautiful" at the Super Bowl game in Atlanta on Feb. 3.

Music // 1 year ago
Gladys Knight to sing the national anthem at Super Bowl LIII
Music legend Gladys Knight has signed on to sing "The Star-Spangled Banner" at next month's Super Bowl in Atlanta.

Entertainment News // 1 year ago
Gospel legends pay tribute to Aretha Franklin at AMAs
The American Music Awards paid tribute to the legacy of the late Aretha Franklin with a video montage and performances by various gospel artists.

Music // 2 years ago
Jay-Z honored at gala ahead of Sunday's Grammys ceremony
Jay-Z was honored with the 2018 Grammy Salute to Industry Icons Award at Saturday night's Clive Davis and Recording Academy Pre-Grammy Gala in New York.

Gladys Maria Knight (born May 28, 1944), known as the "Empress of Soul", is an American R&B/soul singer-songwriter, actress, businesswoman, humanitarian, and author. She is best known for the hits she recorded during the 1960s and 1970s, for both the Motown and Buddah Records labels, with her group Gladys Knight & the Pips, the most famous incarnation of which also included her brother Merald "Bubba" Knight and her cousins Edward Patten and William Guest.

Knight was born in Atlanta, Georgia, the daughter of Sarah Elizabeth (née Woods) and Merald Woodlow Knight, Sr., a postal worker. She first achieved minor fame by winning Ted Mack's Original Amateur Hour TV show contest at the age of 7 in 1952. The following year, she, her brother Merald, sister Brenda, and cousins William and Elenor Guest formed a musical group called The Pips (named after another cousin, James "Pip" Woods). By the end of the decade, the act had begun to tour, and had replaced Brenda Knight and Eleanor Guest with Gladys Knight's cousin Edward Patten and friend Langston George.

Gladys Knight & the Pips joined the Motown roster in 1966, and, although regarded as a second-string act, scored several hit singles, including "I Heard It Through the Grapevine", (recorded later by Marvin Gaye), "Friendship Train" (1969), "If I Were Your Woman" (1970), "I Don't Want To Do Wrong" (1971), the Grammy Award winning "Neither One of Us (Wants to Be the First to Say Goodbye)" (1972), and "Daddy Could Swear (I Declare)" (1973). In their early Motown career Gladys Knight and the Pips toured as the opening act for Diana Ross and The Supremes. Gladys Knight stated in her memoirs that Miss Ross kicked her off the tour because the audience's reception to Knight's soulful performance overshadowed her. Berry Gordy later told Gladys that she was giving his act a hard time.

FULL ARTICLE AT WIKIPEDIA.ORG
This article is licensed under the GNU Free Documentation License.
It uses material from the Wikipedia article "Gladys Knight."
Back to Article
/