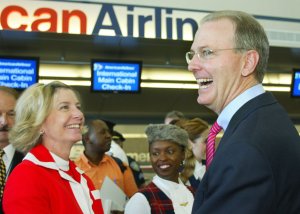 The reality is we will not be able to fly every nonstop route we fly today, nor will we be able to provide the same level of service in markets that cannot profitably support our current flight schedule

It will come as no surprise to anyone that there is a definite need to rebuild trust within our company, not just between unions and management but between every member of the AMR family, and that starts at the top

Gerard J. Arpey (born 26 July 1958) is the Chairman, President, and Chief Executive Officer (CEO) of AMR Corporation, parent company to American Airlines. Gerard J. Arpey was elected Chairman of AMR Corporation and American Airlines, Inc. in May 2004. Arpey had been President and Chief Executive Officer of AMR and American, since April 2003, when he was first elected a member of the Board of Directors of both companies. Prior to that, he had served as President and Chief Operating Officer of AMR and American since April 2002. Arpey leads a global organization that includes American Airlines, American Eagle and AmericanConnection, serving approximately 250 cities in 40 countries and territories around the world. The combined network offers, on average, more than 3,400 flights a day with nearly 900 aircraft. Before his appointment as President and COO, Arpey served as the American’s Executive Vice President of Operations, Senior Vice President of Finance and Planning, as well as its Chief Financial Officer and Senior Vice President of Planning. As Executive Vice President of Operations, Arpey was responsible for American’s worldwide flight operations including Maintenance and Engineering, Flight Department, Operations Planning, Purchasing, Corporate Real Estate, AA Cargo and American Eagle. As the company’s chief finance and planning executive, Arpey directed the corporation’s strategic planning activities, including its scheduling, fleet planning and airline partnership activities. As Chief Financial Officer, he was responsible for the corporation’s finance functions including the Financial Planning, Treasury, Accounting, Corporate Development, and Investor Relations groups. Arpey joined American Airlines in 1982 as a Financial Analyst. He has held numerous management positions during his career at American, including Managing Director of Airline Profitability Analysis, Managing Director of Financial Analysis and Fleet Planning, and Managing Director of Financial Planning. He became a corporate officer in 1989, when he was elected Vice President of Financial Planning and Analysis. Arpey received a Bachelor of Business Administration Degree in 1980 and an MBA in 1982, both from the University of Texas at Austin. He also holds a FAA Multi-Engine Instrument Pilot Rating and is an avid private pilot. Arpey is a member of the Board of Directors of S. C. Johnson & Son, Inc. (A Family Company). He is also a member of The Business Council and involved in a variety of civic organizations. Arpey was Executive Vice President of Operations at the time of the September 11, 2001 terrorist attacks in which American Airlines lost two planes. Arpey made the decision to put a ground all American Airlines flights in Northeast USA and then across the US before the FAA.

FULL ARTICLE AT WIKIPEDIA.ORG
This article is licensed under the GNU Free Documentation License.
It uses material from the Wikipedia article "Gerard Arpey."
Back to Article
/