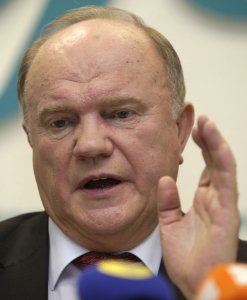 We believe that a special commission of deputies from the State Duma (lower house of parliament), members of the Federation Council (upper house) and the Kremlin administration must be set up to investigate the facts relating to the election's total falsification

I not only suggest this, I know very well how this can be arranged. There is nothing strange here

It's strange that not a single duck has yet died in America -- they are all dying in Russia and European countries. This makes one seriously wonder why

The party elected me leader, and as the leader I must carry out the party's assignment to run for president. ... If the party assigns me to run, I am ready to run

Zyuganov was born in Mymrino, a farming village in Oryol Oblast, south of Moscow. The son and grandson of schoolteachers, he followed in their footsteps: after graduating from a secondary school, his first job was working there for one year as a physics teacher in 1961.

In 1962, he enrolled into the Department of Physics and Mathematics of Oryol Pedagogical Institute. From 1963 to 1966, he served in a Radiation, Chemical, and Biological Intelligence unit of the Group of Soviet Forces in Germany. Zyuganov joined the Communist Party in 1966.

FULL ARTICLE AT WIKIPEDIA.ORG
This article is licensed under the GNU Free Documentation License.
It uses material from the Wikipedia article "Gennady Zyuganov."