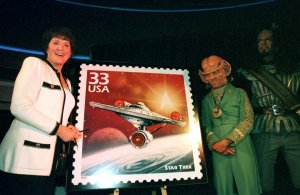 Top News // 2 years ago
The Almanac
On Aug. 19, 1991, a coup orchestrated by hard-line Communists removed Mikhail Gorbachev as president of the Soviet Union.

Top News // 5 years ago
The Almanac
On Aug. 19, 1991, a coup orchestrated by hard-line Communists removed Mikhail Gorbachev as president of the Soviet Union. The coup would lead to the dissolution of the Soviet Union on December 26, 1991.

TV // 6 years ago
'Star Trek Discovery': New starship takes flight in new teaser for series
The next starship to explore the final frontier has been revealed in a new teaser for CBS's upcoming series, "Star Trek: Discovery."

Entertainment News // 6 years ago
George Takei on turning Star Trek's Hikaru Sulu gay: 'It's a twisting of Gene's creation'
George Takei, who originally played Hikaru Sulu on "Star Trek" has spoken out against the character being revealed as gay in "Star Trek Beyond."

Eugene Wesley "Gene" Roddenberry (August 19, 1921 – October 24, 1991) was an American television screenwriter, producer and futurist, best known for creating the American science fiction series Star Trek. Born in El Paso, Texas, Roddenberry grew up in Los Angeles, California where his father worked as a police officer. Roddenberry flew 89 combat missions in the United States Army Air Forces during World War II, and worked as a commercial pilot after the war. He later followed in his father's footsteps, joining the Los Angeles Police Department to provide for his family, but began focusing on writing scripts for television.

As a freelance writer, Roddenberry wrote scripts for Highway Patrol, Have Gun, Will Travel and other series, before creating and producing his own television program, The Lieutenant. In 1964, Roddenberry created Star Trek, and it premiered in 1966, running for three seasons before cancellation. Syndication of Star Trek led to increasing popularity, and Roddenberry continued to create, produce, and consult on Star Trek films and the television series, Star Trek: The Next Generation until his death. Roddenberry received a star on the Hollywood Walk of Fame and he was inducted into the Science Fiction Hall of Fame and the Academy of Television Arts & Sciences' Hall of Fame. Years after his death, Roddenberry was one of the first humans to have his ashes "buried" in outer space.

The fictional Star Trek universe Roddenberry created has spanned over four decades, producing six television series, 715 episodes and eleven films, with a twelfth film currently in development and scheduled for a 2012 release.

FULL ARTICLE AT WIKIPEDIA.ORG
This article is licensed under the GNU Free Documentation License.
It uses material from the Wikipedia article "Gene Roddenberry."