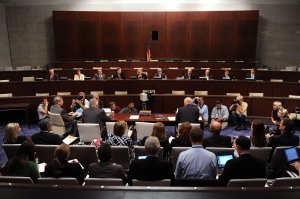 U.S. News // 1 year ago
Impeachment manager Rep. Sylvia Garcia known for calm amid bombast
A veteran Houston politician midway through her first term in Congress, U.S. Rep. Sylvia R. Garcia is at the center of the impeachment trial of President Donald Trump.

Health News // 4 years ago
Congressional group gives bipartisan support to vaccine safety
A group of six high-ranking U.S. Senators and House members from both parties issued a statement supporting the safety and efficacy of FDA-approved vaccines.

Raymond Eugene "Gene" Green (born October 17, 1947) is the U.S. Representative for Texas's 29th congressional district, serving since 1993. He is a member of the Democratic Party. The district includes most of eastern Houston, along with large portions of Houston's eastern suburbs.

Green was born in Houston and he graduated from the University of Houston, earning a bachelor's degree in business administration in 1971 and a law degree in 1977. He held positions as a business manager and a private attorney prior to his election to Congress.

FULL ARTICLE AT WIKIPEDIA.ORG
This article is licensed under the GNU Free Documentation License.
It uses material from the Wikipedia article "Gene Green."
Back to Article
/