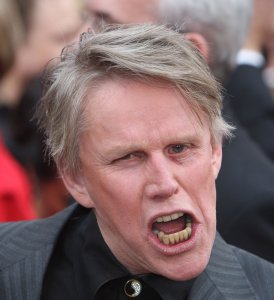 TV // 2 years ago
'Sharknado' trailer has dinosaurs, knights, cowboys
Syfy has released another trailer for its TV movie "The Last Sharknado: It's About Time."

He's either a genius or a moron, and I can't figure it out

William Gary Busey (born June 29, 1944), best known as Gary Busey, is an American film and stage actor and artist. He has appeared in over 120 films, as well as making regular appearances on Gunsmoke, Walker, Texas Ranger, Law & Order, and Entourage. He received an Academy Award nomination for Best Actor in 1978 for his role in The Buddy Holly Story.

Busey was born in Goose Creek (now Baytown), Texas, the son of Sadie Virginia (née Arnett), a homemaker, and Delmer Lloyd Busey, a construction design manager. He graduated from Nathan Hale High School in Tulsa, Oklahoma, in 1962. While attending Pittsburg State University in Pittsburg, in southeastern Kansas, on a football scholarship, he became interested in acting. He then transferred to Oklahoma State University in Stillwater, where he quit school just one class short of graduation.

Busey began his show-business career as a drummer in The Rubber Band. He appears on several Leon Russell recordings, credited as playing drums under the names "Teddy Jack Eddy" and "Sprunk", a character he created when he was a cast member of a local television comedy show in Tulsa, Oklahoma, called The Uncanny Film Festival and Camp Meeting (which starred fellow Tulsan Gailard Sartain as "Dr. Mazeppa Pompazoidi"). He played in a band called Carp, who released one album on Epic Records in 1969. Busey continued to play several small roles in both film and television during the 1970s. In 1975, as the character "Harvey Daley," he was the last person killed on the series Gunsmoke (in the antepenultimate episode, No. 633 – "The Los Carnales").

FULL ARTICLE AT WIKIPEDIA.ORG
This article is licensed under the GNU Free Documentation License.
It uses material from the Wikipedia article "Gary Busey."
Back to Article
/