Top News // 4 years ago
The Almanac
On July 21, 1925, the so-called Monkey Trial ended with John Thomas Scopes convicted and fined $100 for teaching evolution in violation of state law.
TV // 6 years ago
'Alpha House,' 'Betas' to premiere on Amazon this month
Amazon says the first three episodes of its new U.S. shows "Alpha House" and "Betas" will be free when they premiere on the website this month.
Odd News // 7 years ago
The almanac
UPI Almanac for Sunday, July 21, 2013.
TV // 7 years ago
John Goodman, Ed Begley Jr. to star in Amazon's first original shows
America's Amazon shopping website says it has ordered its first five original series based in part on customer response to online pilots for the shows.
U.S. News // 8 years ago
'Doonesbury' artist defends abortion strip
"Doonesbury" cartoonist Garry Trudeau said he felt obliged to tackle women's healthcare rights amid debate about Virginia and Texas pre-abortion sonogram bills.
U.S. News // 9 years ago
Cartoonist, lobbyist in spat over Gbagbo
A Washington lobbyist targeted in "Doonesbury" for representing Ivory Coast's deposed ruler is dueling with cartoonist Garry Trudeau.
TV // 1 decade ago
Daily 'Doonesbury' to go color in D.C.
The Washington Post will run the "Doonesbury" comic strip in full color beginning this week, the newspaper said Sunday.
Entertainment News // 1 decade ago
Doonesbury: 'Obama wins!'
Garry Trudeau, who draws the long-running U.S. comic strip "Doonesbury," has prepared a strip for next week presuming an Obama victory on Election Day.

Butts is such an irrepressibly upbeat advocate of bad choices that it's good to see his stunned visage evoked for a worthy cause. He would be horrified to know he's the poster butt for this campaign, but his dismay is a small price to pay to help keep Santa Monica's breeze fresh and its sands filter-free

I think it's fair to say that Gbagbo didn't send you $300,000 to arrange his own exit. Indeed, he murdered countless countrymen trying to avoid exactly that outcome. You may frame your resignation as a gesture of principle if you'd like, but most people know a face-saving exit strategy when they see one 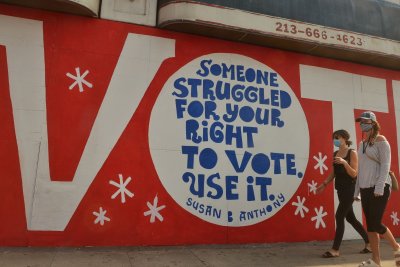 Trudeau was born in New York City, the son of Jean Douglas (née Moore) and Francis Berger Trudeau. He is the great-grandson of Dr. Edward Livingston Trudeau, who created the world-famous Adirondack Cottage Sanitorium for the treatment of pulmonary tuberculosis at Saranac Lake, New York State. Edward was succeeded by his son Francis and grandson Francis Jr. The latter founded the Trudeau Institute at Saranac Lake, with which his son Garry retains a connection.

Raised in Saranac Lake, Garry Trudeau attended St. Paul's School in Concord, New Hampshire. He enrolled in Yale University in 1966 and later became a member of Scroll and Key. Trudeau was confident that his major would end up being theatre, but he discovered a greater interest in art design. A drawing by Trudeau of famous Yale quarterback Brian Dowling for the Yale Daily News led to the creation of a comic strip for the paper, Bull Tales, the progenitor of Doonesbury. As a Yale undergrad, Trudeau was also the Editor-in-Chief of The Yale Record, the nation's oldest college humor magazine. Trudeau continued his studies with postgraduate work at the Yale School of Art, earning his M.F.A. in graphic design in 1973.

FULL ARTICLE AT WIKIPEDIA.ORG
This article is licensed under the GNU Free Documentation License.
It uses material from the Wikipedia article "Garry Trudeau."
Back to Article
/