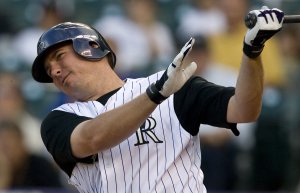 In 2005, his 89 runs batted in led not only the Rockies, but all major league rookies as well. In 2006, Atkins ranked in the top ten of nearly all batting categories in the National League, posting a .329 batting average with 120 runs batted in and 117 runs scored.

Atkins attended University High School in Irvine, California. As a senior, he was named the Irvine World News All-City MVP, after posting a .557 batting average, along with a school single-season record 13 home runs.

FULL ARTICLE AT WIKIPEDIA.ORG
This article is licensed under the GNU Free Documentation License.
It uses material from the Wikipedia article "Garrett Atkins."
Back to Article
/