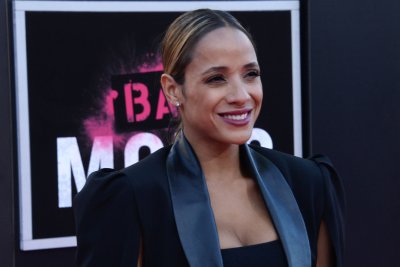 TV // 2 years ago
Season 7 of 'Once Upon a Time' will be its last
"Once Upon a Time" co-creator Adam Horowitz said Tuesday his ABC fairytale drama is ending with its seventh season.

Gabrielle Anwar (born 4 February 1970) is an English actress, known for her roles in the 1990s films Scent of a Woman, The Three Musketeers, and Body Snatchers. Notable television roles include the fashion-conscious graphic designer Sam Black in the second series of the Children's ITV series Press Gang and Margaret Tudor on The Tudors. Since 2007, she has starred as Fiona Glenanne opposite Jeffrey Donovan and Bruce Campbell on the USA Network television series Burn Notice.

Anwar was born in Laleham, Middlesex, England. Her mother, Shirley, is an English actress, and her father, Tariq Anwar, is an Indian-born, Persian, award-winning British film producer and editor. She is also of part Austrian descent. Anwar attended Laleham C. of E. Primary and Middle School from 1975 to 1982; an end-of-term St. Trinian's sketch in the school concert of 1982 gave an early indication of her theatrical leanings. She studied at the London drama and dance school Italia Conti.

Anwar's acting debut was in the British miniseries Hideaway. She made her film debut in Manifesto, which was followed by more British television productions including First Born, Summer's Lease, Press Gang, and The Mysteries of the Dark Jungle. While working on movies and television in London, she met American actor Craig Sheffer, and moved with him to Hollywood. Anwar and Sheffer have co-starred in a number of American movies together, such as In Pursuit of Honor, The Grave, Turbulence 3: Heavy Metal, Flying Virus, Save It for Later, Water Under the Bridge, and Long Lost Son.

FULL ARTICLE AT WIKIPEDIA.ORG
This article is licensed under the GNU Free Documentation License.
It uses material from the Wikipedia article "Gabrielle Anwar."
Back to Article
/