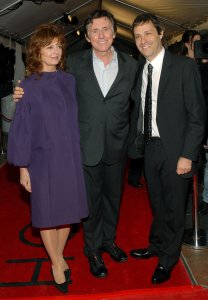 TV // 1 year ago
'Younger' star Miriam Shor praises Diana as 'unapologetically powerful'
Miriam Shor said it is a joy to play Diana Trout on "Younger" because she is nothing like the supremely demanding and self-assured marketing executive.

TV // 1 year ago
'Vikings' to end with Season 6
The upcoming, sixth season of History channel's drama "Vikings" will be its last.

Gabriel James Byrne (born May 12, 1950) is an Irish actor, film director, film producer, writer, and audiobook narrator. His acting career began in the Focus Theatre before he joined London’s Royal Court Theatre in 1979. Byrne's screen début came in the Irish soap opera The Riordans and the spin-off show Bracken. The actor has now starred in over 35 feature films, such as The Usual Suspects, Miller's Crossing and Stigmata, in addition to writing two. Byrne's producing credits include the Academy Award-nominated In the Name of the Father. Currently, he is receiving much critical acclaim for his role as Dr. Paul Weston in the HBO drama In Treatment.

Byrne, the first of six children, was born in Crumlin, Dublin, Ireland, the son of a cooper and soldier, Dan, and a hospital nurse from Galway, Eileen (née Gannon). His siblings are Donal, Thomas, Breda, and Margaret. Another, Marian, died at a young age. Byrne was raised Roman Catholic and educated by the Irish Christian Brothers.

About his early training to become a priest, he said in an interview, "I spent five years in the seminary and I suppose it was assumed that one had a vocation. I realised subsequently that I didn't." He attended University College Dublin, where he studied archaeology and linguistics, becoming proficient in Irish. He played football in Dublin with the Stella Maris Football Club in Drumcondra.

FULL ARTICLE AT WIKIPEDIA.ORG
This article is licensed under the GNU Free Documentation License.
It uses material from the Wikipedia article "Gabriel Byrne."
Back to Article
/