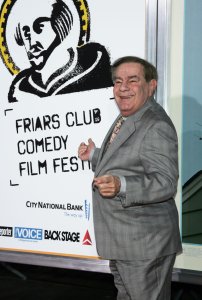 Jewish-American Stand-up comedian, and king of one-liners, best known for his frequent appearances at "Borscht Belt" hotels. He is currently the Dean of the New York Friars' Club in New York City.

FULL ARTICLE AT WIKIPEDIA.ORG
This article is licensed under the GNU Free Documentation License.
It uses material from the Wikipedia article "Freddie Roman."
Back to Article
/